Beer is a serious business… 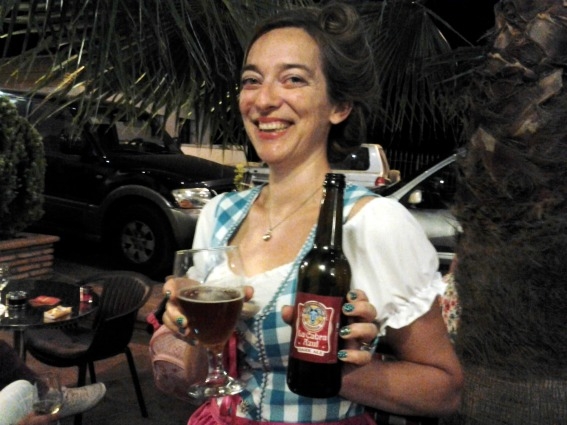 AT Table Mountain in Comares we set up our own micro-brewery earlier this year. How is it going? Well, so far we’ve sold out every week!

Summers just wouldn’t be the same without a nice cold beer, and at Table Mountain we take our beers very seriously, serving a selection from all over the world, including Guinness, La Trappe, Leffe and Franziskaner.

But we were aching to take it further, so we are very proud to announce that we started our very own micro-brewery! It’s called La Cabra Azul (the Blue Goat brewery) and we’re brewing up a real storm. We started with luscious, malty pale ale inspired by the Real Ales from the South of Britain, using hops like East Kent Golding and Bramling Cross. At an alcohol percentage of only 3 per cent it has become very popular, very quickly!

We also brew our own take on IPA, India Pale Ale.  IPA was originally invented by the British in the 19th century, when they wanted to ship ale to their troops in India. To stop the beer going off during the long journey overseas they added lots and lots of hops.

The style caught on. Ever since the micro-brewing revolution swept the world IPA ha been one of the most popular styles because of its special, hoppy, citrusy flavour. Ours is dry hopped with cascade hops for an American style flavour.

We try to use as many local and organic products as we can, including water from the spring at Comares and we’re even growing our own hops.

The beers seem to be an overnight sensation with people coming in and buying up our entire stock when they get the chance. So we’re hoping to ramp up production to meet demand. We’ll also be trying out some special beers in the autumn.

And if you need help deciding, our staff will be more than happy to advise you.

We’ll be expanding our range of beers over the next few months, so do check in with us often to see what’s brewin’!

Los Ventorros is a little village 5mins West of Comares. At the top of the hill go LEFT (not right to Comares)