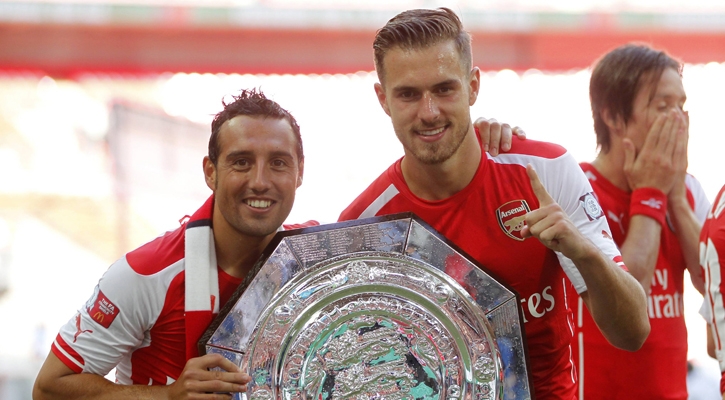 In the Community Shield, a pre-season match that pits the winners of the FA Cup and the Premier League, Arsenal came out triumphant against Manchester City. With the sun shining at Wembley, the Gunners proved too strong for the champions as they won 3-0.

In the first opportunity of the new season for silverware, Arsenal looked the more hungry and focused as they ran out comfortable victors. Manchester City seemed to be suffering from a bit of summer hangover as they never really got going whilst Arsenal were back in the rhythm and impressed in all areas.

Goals from Santi Cazorla, Aaron Ramsey and Olivier Giroud rounded off an excellent all-round performance from the London team. It was a chance for new signings to show what they will bring to their respective teams and they did not disappoint. Calum Chambers showed maturity beyond his young age and Mathieu Debuchy looked comfortable in his role demonstrating he has the ability to play at the highest level. Fernando was controlled and showed glimpses of his quality but by far the outstanding player was Alexis Sanchez who excelled in his wide right role and caused problems throughout the game.

Manchester City was without eight players, whilst German trio Mertesacker, Ozil and Podolski were not in Wenger’s squad.

Arsenal started well with their free-flowing passing style in display across a talented midfield and seemed to catch City off guard resulting in Cazorla’s opener in the 21st minute. Sanogo had a couple of chances before Ramsey combined with the striker to score an exquisite goal after a beautiful touch to beat a defender. After the break, City came back stronger and Jovetic came close to grabbing one back before Giroud made sure of the victory with a strike from 25 yards.

City’s makeshift defence could not handle the fast pace of Arsenal’s attacks but Manuel Pellegrini will not be too worried considering he awaits the return of his preferred defenders Kompany, Zabaleta and Demichelis.

Wenger on the other hand will be ecstatic with his players’ performances and will hope that their form will carry over into the start of the new season.