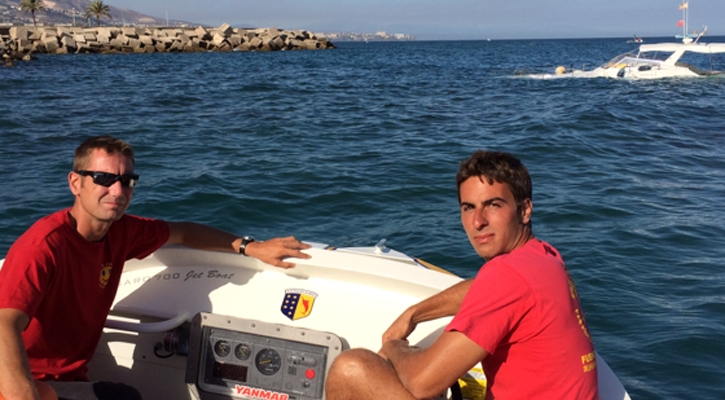 THE marine community of Fuengirola sailed to the rescue after a boat carrying eight passengers foundered just outside the town’s port in thick fog.

And the rapidly reacting locals beat the Guardia Civil and emergency services to the punch by rescuing the captain and passengers before the alert had been officially raised.

Crew from local parasailing and watersports business Smile High were out checking weather conditions in a high powered jet boat The Flash on Wednesday afternoon at 5.50pm in the immediate waters outside Fuengirola Port when they heard a mayday call on the marine radio band. They immediately sailed to the rescue along with another yacht, the Frana.

Paul Taylor and Jose Luis Diaz Prieto, from Smile High, speaking exclusively to Euro Weekly News explained that the distress call said only that the vessel had hit the rocks on the outside of the port and was sinking.

Despite the heavy fog which meant they had to navigate at low speed, the crew was on the scene to help out in just five minutes.

The weather conditions had prevented the use of distress flares. Arriving at the scene, Taylor explained, half of the boat was submerged and half of it was sticking out of the water. The eight passengers on board were all wearing life jackets and had gathered on the bow and were waving for help.

An unknown diver who was out on his own also made for the sinking boat. The diver used an inflated lilo to help in the rescue operation to take the captain from the half-submerged boat to the safety of the Frana.

The rescue, lasting almost 90 minutes, finished at 7.15pm after attempts to free the sinking boat from the rocks failed. After abandoning the vessel the captain and passengers were returned to shore. The Captain, a Dutchman thanked the crew of the Frana and Flash for their courageous and rapid response to his mayday call.

The unknown diver, once all people were off the sinking boat, left the scene as he had arrived – anonymously – and remains unknown to all involved.

The Euro Weekly News asked the Smile High crew how often they would hear of mayday calls in the area, Taylor said: “I have been working here eight years and I have probably heard two or three before but never anything like that, never anything as close.”

Asking what would merit a mayday distress call Taylor said: “If the ship is sinking, if the ship is on fire or if the captain and crew are in immediate danger of losing their lives.”

No emergency services were in attendance throughout the rescue, but they did report finding the yacht – empty of all occupants – later that night.

The incident remained unreported in the news until speaking exclusively with Euro Weekly News. Taylor explained that the Guardia Civil became aware of the incident only after they rescuers returned to shore with the passengers.