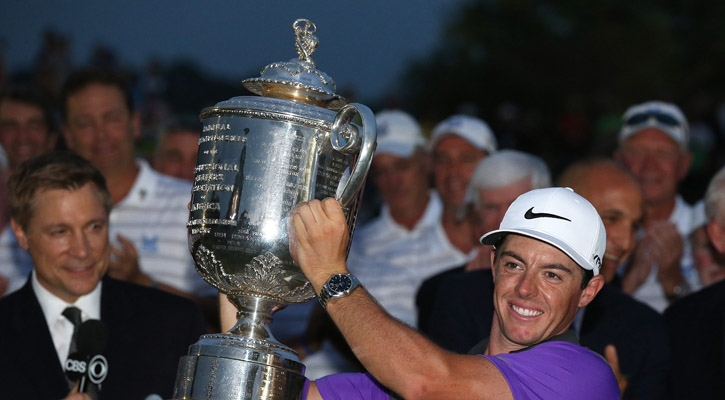 Rory McIlroy is now a four-time Major winner after winning the US PGA at Valhalla this weekend.  He finished one shot ahead of Phil Mickelson on -16 to complete a dream summer for the Northern Irishman.

At the start of the day he held a one shot lead over his nearest competitors but it proved to be a battle as fans saw four different leaders over the course of the day. By the ninth hole, Rickie Fowler had opened up a three stroke advantage over McIlroy with Mickelson, Stenson and Bernd Wiesberger in the middle.

The recovery began at the par five 10th, which saw a master class by the young star, resulting in an eagle three. This reduced the gap to one and his subsequent birdie on 13 brought him level with the leaders.

Darkness was beginning to affect the players and genuine worries were that McIlroy might be left to finish the next day. Mickelson bogeyed the 16th hole and gave the outright lead to McIlroy and it seemed like his tournament to lose. But he had already won the US PGA two years ago, suggesting he could handle the pressure.

The moment of the tournament came when sportsmanship won through. Due to the reduced visibility, Mickelson and Fowler allowed McIlroy to play right behind them to make sure he could finish his round. The gesture epitomised the spirit of golf especially when so many sports worldwide are criticised for cheating and other scandals.

Remarkably, Mickelson achieved his first top 10 finish of the year and Rickie Fowler finished one shot further back, continuing his incredible form at the Majors. He has not finished outside the top five in the four Majors this year.

McIlroy stayed clear of ‘Lefty’ to clinch the win and is beginning to demonstrate the quality shown by legends Tiger Woods and Jack Nicklaus, although he still has some way to go.