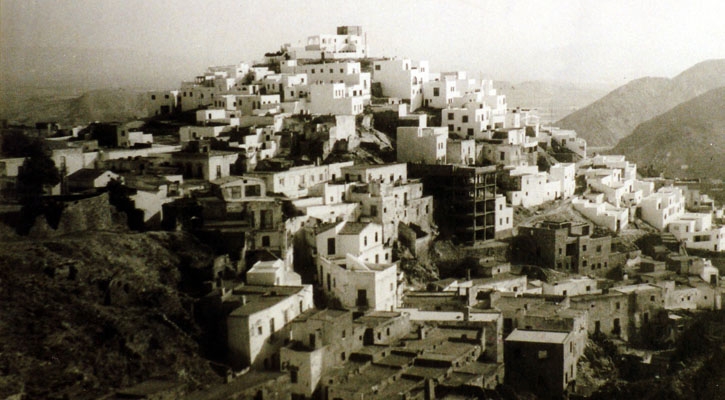 It’s been a good trip, reflecting back upon those past years.

I hope it has been as much fun for you as it has for me, shaking awake some of the old grey brain cells and squeezing out almost forgotten vignettes.

Never did I foresee what could have come: nowhere to park, weather seemingly hotter, and traffic impossible; urban legends I never envisioned.

During my reverie, my friend Paco Haro popped in to say hello. He was that magic ‘camarero’ (waiter) from the Hotel Indalo who witnessed Mojacar jolted from the Neolithic into the Space Age. He carried a handful of invites officially announcing the release of his unique book concerning all he had witnessed while attending to the new arrivals in Mojacar some 45 years ago.

He stood before me wearing shorts. They didn’t come into acceptable fashion until less than 15 years ago. He was sporting sunglasses, an item that only top officials in the Guardia Civil wore, tinted in a dark bronze. Oh, Paco, that colourful sports shirt with collar; it’s all too much!

Paco’s book is polite, even gracious, when considering the time frame. There are some light-hearted chapters probably written after a half jug of sangria. And there are some sad chapters.

It is called Mojaqueros de Hecho, which is genuinely a compliment to the invading hordes that swooped down on that abandoned village of brick dust, adobe dwellings just wide enough apart to allow the village burro’s passage. In those early years, Paco was an eight-year-old waiter in his father’s hotel, the Indalo, centre of the village square.

In his book, he identifies compassionately with the invaders. “Well, nice to meet you, Señor Attila The Hun. What a fine colourful group of friends you’ve brought with you tonight!” And they were wined and dined to the very best Mojacar had to offer. Waited on with kind and courteous words. Nevertheless, stridently observed by the sparkling eyes of a youngster.

Common sense would have dictated an envy and blatant hatred for the noisy, marauding circus, but it wasn’t written that way. His commentaries are as good as that first European trekker from Nuremberg, one Herr Muller, back in 1492.

I repeat. The book is called Mojaqueros de Hecho and is available at all the local paper shops. Other than a brilliant introduction written by local savant Jose Maria de Haro, the rest is in Spanish.

Page after exciting storytelling page, full of secret histories. Full of insight, it is also a good historical lesson. Upon the shoulders of these giants we now stand today.

Official book release Saturday August 16 at 8pm in the multi-centre.

The rare photos alone are enough to give the tome importance, but the writing is even better.