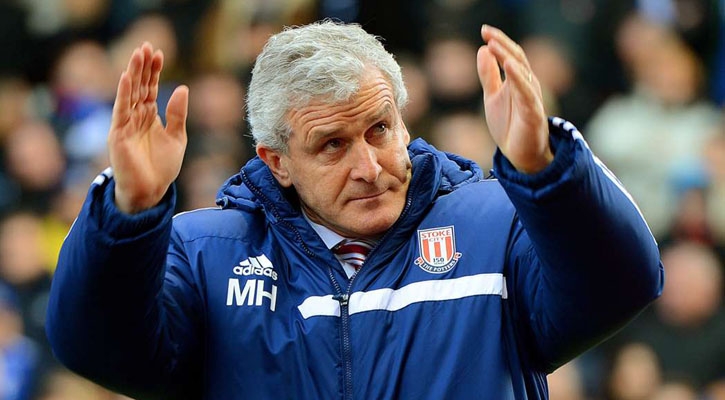 Stoke City underwent a bit of change in 2013 after letting go of Tony Pulis and installing Mark Hughes as manager with a change in style visible.  The result was a best ever finish for The Potters last year in 9th place.

The revolution is set to continue and fans of The Potters will be in high hopes this coming season of equalling their performance. They have a tight knit group of players with quality around the pitch which is slowly changing the perception that they are a boring team set on defence mode.

‘Sparky’ has combined the two elements well with a quick attacking trio including Odemwingie and Jerome. This tactic has worked well and has allowed Stoke the option of counter attack whereas before that was impossible. This summer some investment has been made in strike force with BojanKrkic arriving for around €4 million. He has settled in excellently scoring three goals in pre-season already.

Along with the former Barcelona striker, Hughes has gone for Steve Sidwell on a free and Phil Bardsley from Sunderland to strengthen the backline whilst also offering attacking options. Bardsley is not shy of a shot at goal with a decent number of goals per season considering his position at left back.

The defensive half of the team has not changed massively for the last few years due to its success with Begovic, Shawcross and Huth dominating in terms of strength and height. Their back ups are of the same mould with Shotton and Cameron having played their role commendably. To add that bit of European flair, Stoke have poached Muniesa from Spain who is young and will get his chance. The wings are set too with Bardsley on one flank and Erik Pieters the other. This is a well organised and hard defence to break down which is a must for a Premier League side.

The Potters have made a giant stride ahead of these players though; Ireland, Adam and Sidwell all have experience at the highest level in the Premier League with Charlie Adam specifically important with his trademark set-pieces connecting with one of Shawcross, Huth or Peter Crouch.

Palacios and N’Zonzi provide bite and determination protecting the defence and whichever one plays results in a good performance. N’Zonzi does offer a bit more though and Palacios does not seem to be at the same level as he was while playing for Spurs.

Most surprising for the Stoke faithful though will be their options upfront which any team in the lower half of the league would envy. The list reads; Cameron Jerome, Peter Odemwingie, Jon Walters, BojanKrkic, Marko Arnautovic, MameBiramDiouf and of course ‘Crouchy.’ Who wouldn’t want to see the big lad performing the robot a few times this season?

Jerome is rapid whilst Odemwingie is a very skilful player with an eye for goal, Bojan is a product of Barcelona which speaks for itself and Arnautovic was in good form when he played for The Potters last season. Not to forget Peter Crouch who although is not the quickest or the sharpest, he creates problems for defenders with his height and plays the hold-up role very well allowing for the speedsters to latch onto through balls played by the likes of Ireland and Adam.

I must admit that they have impressed me and I believe most of the Premier League fans and all signs point to Stoke City being a mainstay in the league. Mark Hughes has been unlucky in a couple of jobs especially at Manchester City where he was prevented from building something special. My gut tells me that Stoke City will finish 10th but a cheeky push could well be made for the Europa League and a cup run is definitely not beyond them. Good things are coming to the city of Stoke and The Potters will trouble teams in the upcoming Premier League season.