No more put-put from tuk tuk 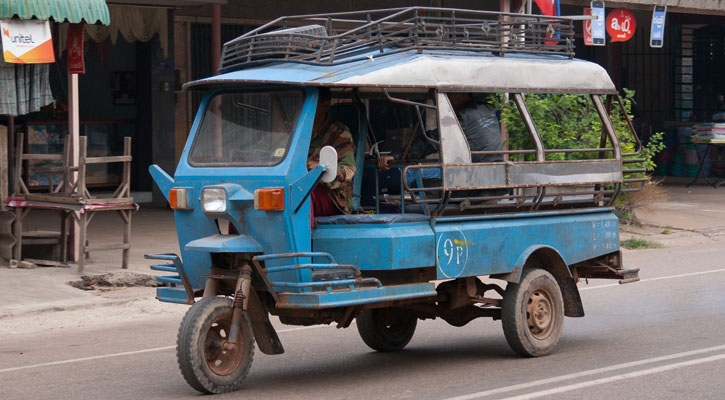 The early 1960’s to the late 1970’s saw many young people, like Steve Jobs the late Apple guru take the Hippie trail to India from West to East seeking personal enlightenment, love, peace and cheap accommodation. Many inspired by the new philosophies discovered on the subcontinent brought back new innovative ways of thinking and products that soon made their way into everyday life and business practice.

Naveen Rabelli, 33, an electrical engineer from Bangalore, India, is planning a road trip with a difference, in a reverse of the original Hippie trail, he plans to drive one of India’s renowned tuk tuk three wheeled vans, the difference being that his vehicle will be silent and run on electricity supplied by solar power.

One day sitting in the maelstrom of downtown Bangalore traffic surrounded by the ubiquitous put-put-put and pollution of the vehicles, he pondered the notion of powering one on clean, silent energy – solar power.

Fast forward a few years and Naveen has converted a two stroke engine tuk tuk, he calls Tejas, the Sanskrit word for radiance, into a silent solar powered vehicle with capacity to carry four people at 25 mph over a distance of 50 miles before it needs an eight hour charge.

The idea to take a road trip with his creation, from India to London, he hopes will show people how a small team without many resources can undertake a long journey using clean energy. Naveen reckons solar powered tuk tuks could revolutionise transport in Asia and bring an end to one of the main polluters in Asian cities.

Naveen reckons he’ll need a budget of about $45,000 (33,646.39 euros) to make the 8,000km long trip and is seeking sponsorship to help finance his project.In order to fund himself,  he’s been working part-time as a badminton coach to give himself more time for getting his electric tuk tuk fully ready.

Raoul Kopacka, an Austrian filmmaker is planning to film a documentary of the trip they hope to complete in 100 days. From Bangalore, they will travel to Mumbai, Iran through Turkey, Bulgaria, Serbia, Hungary, Austria and Germany on their way to the ferry at Calais, before their hopeful arrival in London.