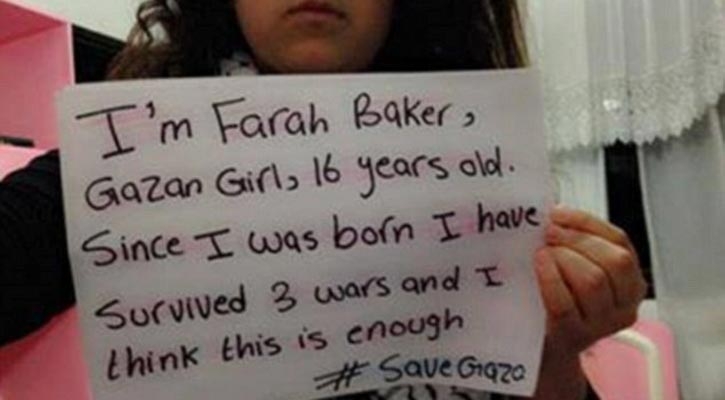 WHEN brave @Farah_Gazan, the 16 year old Palestinian girl, whose live tweeting of the shelling of Gaza has caught the world´s attention, tweets “I don´t dream about my future, bcoz I can be killed at anytime.” More and more of us pay attention not just to the news, but mostly to the messenger.

Farah Baker lives with her family in the heart of Gaza, near the Al-Shifa Hospital, where her father is a neurosurgeon.  Her tweets have captured the essence of the conflict where she feels she might die at any moment, as so called smart bombs devastate civilian centres in her neighbourhood despite being aimed at military targets.

Farah´s 208,000 twitter followers were alerted to the resumption of hostilities shortly before 10pm local time, ahead of the mainstream media, as talks broke down in Cairo when Farah tweeted. The immediacy of Farah´s tweets give followers a stark idea of the hell Farah is living through.

HUGEEE EXPLOSIONS CLOSE TO MY AREA, THEY JUST LIT UP THE SKY #GazaUnderAttack

MANY HUGE BOMBS ARE LIGHTENING UP THE AREA #GazaUnderAttack

I tried to record the bombs sound but I couldn’t! I froze #GazaUnderAttack

Farah’s last tweet of the night was a retweet of MahmoudHrebat accusing Israeli forces of resuming hostilities by claiming none of the Palestinian factions had claimed responsibility for firing the first two rockets.

Retweeted by Guess what

Thankfully Farah, the self proclaimed ¨Anne Frank of Gaza¨, was back online this morning updating her concerned followers.

Israel accused Hamas of launching two rockets from Gaza hours before the end of the latest truce. Their response was swift and militarily efficient. A young mother and her two-year-old daughter – reportedly the wife and child of Mohammed Deif, Hamas’s military chief, died in an air strike on a house in Gaza City last night. A third person was also killed and five people injured. Other reported fatalities include eight members of the same family, including a 32- week pregnant mother and her three children, who were killed when a house in Gaza was obliterated early this morning.  Hundreds of civilians fled their homes for UN shelters.

These are situations that courageous Farah and her family face on a daily basis.

Whereas most teenage girls tweet about their favourite cat videos, boy-bands and what clothes to wear, Farah´s tweets are more concerned with keeping her six year old sister calm during Israeli shelling, learning how to breathe properly and dreams of long walks once the shelling stops.

This is the third war Farah and her sister have had endure throughout their short lives.

Their bedroom windows are constantly shattered by attacks. Her family are continually trapped inside her home during the fiercest strikes on Gaza. The house is often without power and Farah´s family are unable to do simple things such as walk outside or visit a school friend.

Farah’s tweets, vines and facebook updates keep coming as she urges the rest of the world to help her city and her people.

Two thousand people – including 550 children have been killed in fighting since July 8 and up to 10,000 have been injured, according to the Gaza Ministry of Health. Approximately 17,000 homes have been destroyed, along with scores of schools, hospitals and Mosques.

Sixty four Israeli soldiers have been killed fighting, including five killed by friendly fire. Three civilians – two Israelis and a migrant Thai worker – were killed by rockets launched from Gaza.