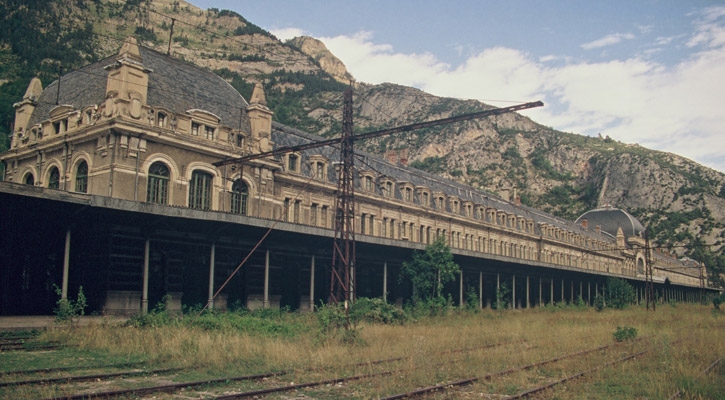 THE Somport pass has been a principal route over the Pyrenees mountains for centuries, frequented by pilgrims using the ‘Tolosana’ path to Santiago de Campostella and hikers and skiers visiting the region’s natural parks and ski resorts.

Yet in this remote valley, seven kilometres from the French border, stands Europe’s second largest railway station after that of Leipzig in Germany.

Declared an historic monument by the Aragon Government, the monumental, palatial building is a perfect example of 19th century French urban architecture with stone walls, mansard windows and rounded slate roofs, built with symmetrical precision. The canopy overhanging the platforms is supported by 64 decorative wrought iron columns spread equally along the length of the 280 metre long station, exceeding by 12 metres the Titanic liner.

Designed for a golden age of transport the station is now derelict and decaying. The platforms are deserted, the rails and points overgrown and rusting. The view through the grime covered windows is like peering into the interior of the Titanic. The remains of the decorative ceiling and main staircase of the ticket hall provide a reminder of its original grandeur and elegance. Inside the vast customs hall rows of bare wooden trestle tables still stand where hundreds of passengers once had to form lines to check their baggage before changing trains. Only the signs identify the French and Spanish arrival and departure lounges, whose doors are now warped and padlocked.

The station’s demise could certainly not have been foreseen when the Aragon Government first began to study the concept of a rail link across the Pyrenees in 1853 as a means of expanding trade between Pau and Zaragoza. Although the idea was not met with enthusiasm by either the French or Catalan and Navarre authorities, the Spanish Government agreed to back the project and in 1882 passed the “Canfranc Law”.

The Somport rail tunnel finally opened in 1912 but the First World War interrupted progress and the rail link from Jaca to Canfranc was not completed until the early 1920s. The Spanish convinced the French that the only suitable site for a station and goods yard was near the village of Canfranc. As work continued on the remaining tunnels and viaducts in France, the monumental station was built together with a village to house the 2000 Spanish and French railway employees. Part of the upper floors of the station was designed as an hotel to accommodate travellers while the complex included a post office, telephone exchange and maintenance sheds.

On the 18th July 1928 with full pomp and ceremony heralding new economic and cultural ties between the two nations, the railway was officially opened by King Alfonso X111 of Spain and French president Gaston Doumergue. But the station’s destiny was to be determined by a new world order.

Any expectations of success were dashed by the Wall Street crash and the subsequent economic depression. Further disaster struck in 1931 when a major fire destroyed part of the station and seriously damaged the hotel. Despite these setbacks French hopes were raised by a new rail link from Zaragoza to Valencia opening the way for traffic between south west France and the Spanish Mediterranean port.

Unfortunately the Spanish Civil War intervened. While digging the Somport tunnel the Spanish army had built two strategic forts dominating the pass. At the outbreak of hostilities in 1936 the army blocked the tunnel shutting off the pass and commandeered the station for military use. Before the line could revert to its peacetime role, the Second World War erupted and for five years only military traffic was allowed through the tunnel transporting material from Germany and Switzerland across France to Spain. A recent world Jewry report identified Canfranc as a storage centre for Nazi gold shipped from Switzerland.

After the war it seemed the good times would finally arrive. But as competition from air and road transport increased the mountain railway became an economic liability. The final straw for France came in 1970 when a goods locomotive left unattended without its breaks on destroyed a viaduct as it careered downhill towards Pau. Despite the 1904 treaty which outlawed unilateral decisions, the French rail authorities refused to repair the damaged line. Since the accident 44 years ago no train has crossed the border although one track still functions with a local service maintaining contact for the 900 villagers and tourists with Jaca and Zaragoza.

In 1998 the then mayor of Canfranc, Victor Lopez, organised a series of festivities to commemorate the 70th anniversary of the Station’s inauguration inviting both French and Spanish rail officials in an attempt to generate support for reopening the rail link.

However the only new infrastructure work has been a road tunnel below the mountain which by-passes the station completely. There is a plaque on the station entrance which reads. “The Aragon railway workers commemorate the day 70 years ago when Aragon was connected to Europe in the hope that one day this line will re-open.” In the new age of high speed trains the station is a legacy of our rail heritage.