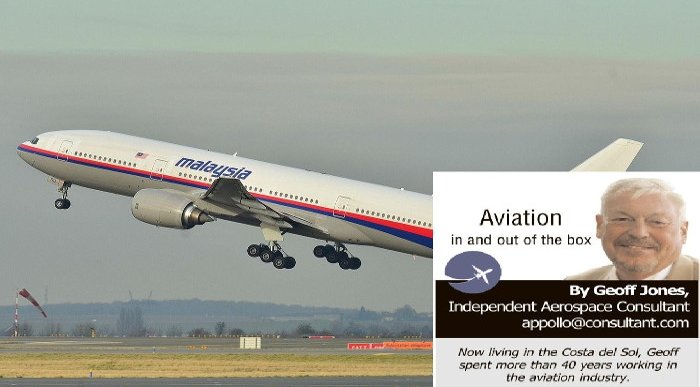 Captain Shah was extremely upset that his close friend Anwar bin Ibrahim, leader of the opposition, had recently been jailed for 5 years  for sodomony and wished to correct, what he saw, as gross injustice .  He decided to take the ‘plane over to do some dastardly deed with it, and to return to Malaysian airspace, after turning off the Aircraft Communications Addressing  and Reporting System, (ACARS), the Transponder, the Cockpit Voice Recorder, and the Digital Flight Data Recorder. He chose his moment Just prior to calling Ho Chi Min Flight Information Region (HCM FIR) having been told by Lumpur Flight Information Region that his flight had been handed over. For seconds and often minutes you are in “no mans land” at this point.

When the aircraft turned back, it was tracked by Malaysian Armed Forces  primary radar. At this point Captain Shah attempted to negotiate the release of his friend and gave the Authorities 5 hours to comply before crashing the aircraft into the Indian Ocean.  No Malaysian military aircraft was scrambled and it was not until 5 hours later that Fl. MA370 was reported missing. Negotiations had failed and the aircraft was now well on its way over the Indian Ocean, watching the sun coming up.

This has allegedly been documented in an Email to CNN and a Malaysian tabloid.

Deal breaker for this scenario.

This scenario has just too many holes in it.

This possibility has been banded about by conspiracy theorists  and those who know nothing about the operation of large commercial  aircraft.

The aircraft turned back towards KL(undisputed) then turned North West towards the “ ‘stans”  and landed in one of the airfields up there.

Deal breaker for this Scenario.

This is a non-starter.

Prior to take off a fire started in the MEC located under the cockpit floor. This is home to to all communication equipment and the wire looms for the “black boxes”. Unfortunately the crew emergency oxygen bottle is also located there. There have been over 20 cases of fire in this area on this type of aircraft always starting on engine start up but usually detected before take off; non have been fatal but all caused extensive damage.

Mh370 took off with a fire under the cockpit floor and was not detected by the crew. 30 minutes after take off the aircraft reached its cruise altitude (FL350), the fire was now serious and they probably begun to  smell it. The structure was weakened and with a pressure of 8.3 pounds per square inch  on it an explosive decompression occurred. This took out many avionic boxes including communications and destroyed the Crew Emergency Oxygen bottle. Aircraft can still fly with a relatively small hole blown in the side and ironically on depletion of cabin pressure there is a total depletion of oxygen thus immediately extinguishing the fire.

Now there is no oxygen to the crew ( the passengers would have had 8-12 minutes with their emergency supply), the temperature inside the aircraft is minus 53 Centigrade, and the crew instinctively  go through their “total loss of cabin pressure” well rehearsed routine. Before being totally overcome by hypoxia they were able to give the Flight Management System a few commands that would have turned the aircraft back to Kuala Lumpur automatically. These commands were neither totally correct or complete. Sadly the crew were soon brain dead ; the aircraft never reached the lower life sustaining altitude and the cabin occupants sadly succumbed to the same fate . For many hours people on the ground rung passenger and crew mobile telephones, which rang but were not answered. The aircraft then flew for approximately 8 hours as a ghost flight over the Indian Ocean.

Deal breakers on this scenario

The exact cause of the aircraft demise we know not. The lack of the whereabouts of the aircraft is due to the lack of action by the Malaysian Armed Forces on the night that  an unidentified aircraft showed up on their Primary Radar screen. A pair of interceptor fighters should have been immediately launched to investigate the “intruder”.  By viewing the aircraft a lot can be established and if it was a “ghost” flight then arrangements could be made to “hand over” the visual surveillance to other countries viz. Indonesia, Singapore and Australia until MH370 run out of fuel and ditched. I think the most classical massive blunder was the answer from the defence minister, Hishammuddin Hussein when he was asked by an Australian TV station why  Malay did not scrabble interceptors to investigate this “intruder”, he replied “but we are not at war with anyone and there is no aerial  hostilities against us”. Although this man has a British master degree in Law I have to ask myself what Kampong pokok he came out of! He failed to add that the military radar operators were all asleep and they didn’t watch the radar recorded video until the next morning.