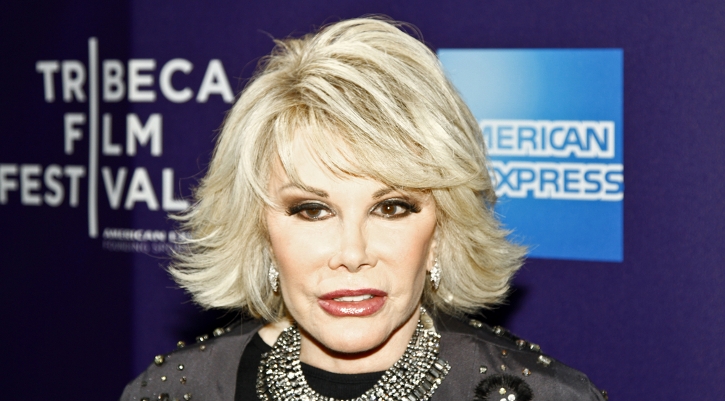 UPDATE: The comedian and actress Joan Rivers has died at the age of 81.

Rivers had been on life support since suffering a cardiac arrest in New York last week.

Her daughter Melissa said in a statement that Rivers was surrounded by family and friends at the end, and she thanked hospital staff for their “amazing care”.

The comedian stopped breathing during an outpatient procedure on her vocal chords last Thursday.

Her daughter, Melissa Rivers, said: “My mother’s greatest joy in life was to make people laugh,

“Although that is difficult to do right now, I know her final wish would be that we return to laughing soon.”

Her big break came in 1965 when she appeared on The Tonight Show Starring Johnny Carson.

UPDATE: Doctors have begun the process of removing Joan Rivers, 81, from a medically-induced coma.

The ‘waking-up’ procedure may not be complete until later on Tuesday, as doctors proceed cautiously. There is a fear that a stroke could leave Rivers dependant on a wheelchair, or with even more serious health complications.

It is reported that the family of Joan Rivers is considering legal action after the star stopped breathing whilst undergoing a routine procedure on her vocal cords.

Currently on life support after her breathing failed, Mount Sinai hospital have still not released any updates on her condition.

They did, however, release a statement issued by her daughter, Melissa Rivers, who said:  “Thank you for your continued love and support. We are keeping our fingers crossed.”

The day before Rivers was taken to hospital, she gave a talk at an event for Time Magazine in New York, where the 81-year-old appeared in good health.

Rivers is a beloved member of the American Showbiz’s old guard, and accordingly floods of supportive messages have been posted on her social media sites.

Her co-stars on her TV show ‘Fashion Police’ also expressed their support, taking to Twitter.

‘Even though Joan’s the strongest woman I know, every single prayer counts. I love you, Joan.’

Whilst Kelly Osbourne also showed her concern for Rivers, tweeting: ‘4 the first time in years I got down on my knees & prayed tonight!

‘I encourage U 2 do the same 4 Joan Rivers my grandma!’