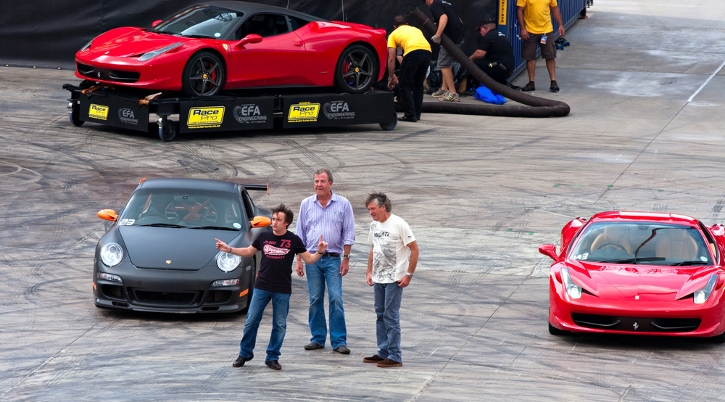 RUMOURS are circulating that BBC DJ Chris Evans may be set to take Jeremy Clarkson’s job as presenter of the hit motoring TV show Top Gear.

Although Clarkson remains a firm favourite with fans of the show, which regularly brings in audiences of six million or more, insider sources say that top TV executives at the BBC may be reluctant to seal another three-year deal with the outspoken petrol head.

Earlier this year in May, it was announced that Clarkson would be signing a new multi-million-pound contract within the coming weeks, but four months have passed without any deals being finalised.

Clarkson’s conduct over the past few years has been far from exemplary, and he has had to excuse his way out of several sticky situations.

Clarkson was publicly criticised by the BBC’s director of television Danny Cohen for using the ‘n word’ whilst reciting the nursery rhyme ‘Eeny, meeny, miny, moe’ during an outtake of Top Gear earlier this year.

He has also recently been criticised for using the word ‘slope’, in a way which could have been construed as racist, seeing as he was filming a Top Gear special in Burma.

Speaking to The Mirror, a TV source said: “Clarkson is undeniably talented, but there is now a small band of BBC executives who believe his knack of getting into trouble has become too big an issue to ignore.

“Chris Evans has shown himself to be just as talented in front of the cameras, and is known for his interest in cars.

“Jeremy’s deal is yet to be signed. There are some people at the very top who are questioning whether he should stay or not.Top of FormBottom of Form

“Danny Cohen is deeply passionate about the BBC being a fair and happy place for people to work – he believes in equality in every area and there are legitimate questions over whether Jeremy has used racist language.”

Forty-two-year-old Evans, known to be an avid motor fan, has so far laughed off the rumours, describing them as ‘hilarious’ and ‘100 per cent not true’ on his Twitter account.

Although Clarkson will remain the bookies’ favourite to continue as the show’s main host, there is no denying that Evans would be a suitable replacement.

Clarkson may have to consider reining in some of his more outlandish remarks if he is to be sure of keeping his lucrative position.