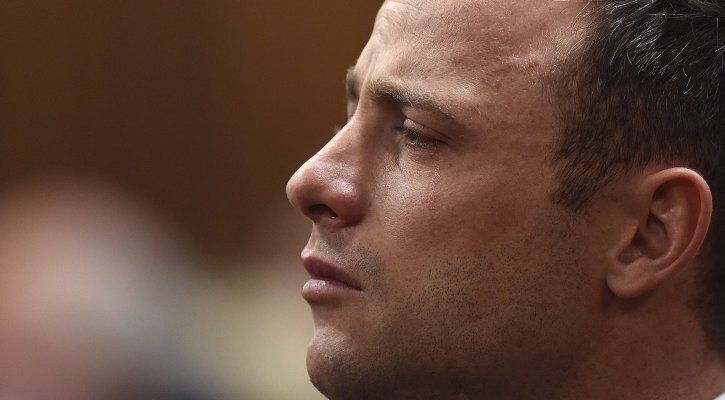 Judge Masipo, concluded that there was not enough evidence to prove that the defendant deliberately set out to murder his girlfriend and therefore it was culpable homicide.

It took the judge just three hours to read out her account of events and witness statements. At times Pistorius appeared to struggle with his emotions, with tears rolling down his face as she read out the verdict.

Court has adjourned until tomorrow, when the athlete will learn his fate concerning the other three offences.

OSCAR PISTORIUS arrived in court this morning to learn his fate as Judge Masipo delivers the verdict on his murder charge.  The murder trial of the double amputee Olympian, which has lasted six months and heard over 41 days of evidence is finally coming to a close today, with the world glued to the televised court room.

Pistorius faces four different offences, one count of murder, two of illegally discharging a firearm and the fourth of illegally possessing ammunition. He has pleaded not guilty to all four.

June and Barry Steencamp, Reeva’s parents, looked tense as they were the first to arrive in court, followed shortly after by Barry Roux, the defence lawyer.  Oscar and his family arrived a few minutes later, surrounded by body guards and the world’s media.  Well-wishers and supporters stood outside the court, offering support and prayers to him.

Judge Masipo was the last to arrive, together with a police escort, ready to deliver her verdict to the court over the next two days. The papers have been kept under lock and key since her decision was made for fear of a leakage to the world press. The judge has said she will take her time to deliver the verdict and will not be rushed by the media.

The judge will go through all the witness statements, including Oscar’s and give her account of the events that occurred that night, before handing out her judgement. Under South African law, there is no jury, so Judge Masipa, along with two assessors will decide on the verdict.

If Pistorius is found guilty of premeditated murder he could face up to 25 years in jail.