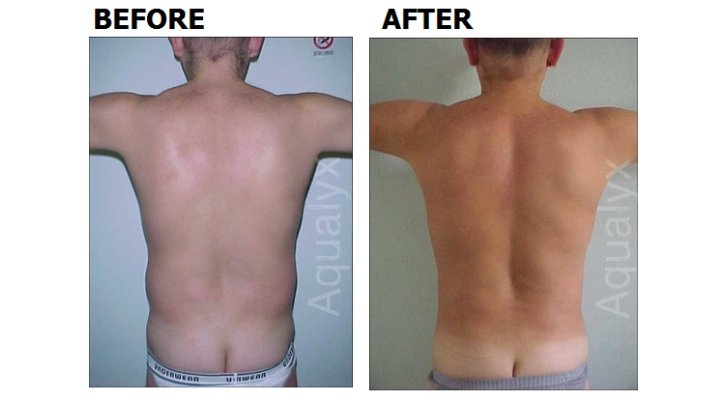 AQUALYX: Works for men as well as women in shifting stubborn pockets

THE product we’ve all been waiting for has arrived. Aqualyx dissolves fat.

Even man boobs simply ‘melt’ away with this amazing product. Aqualyx is perfect for reaching the parts exercise and diet don’t reach, those stubborn pockets of fat that simply won’t shift no matter what you do and with a free consultation with Medcare’s aesthetics doctor in clinics in Benijofar and Alfaz del Pi, you can find out what Aqualyx can do for you.

How does Aqualyx work?

Aqualyx is an injectable gel-based solution. When injected into the problem area it liquefies and breaks down the fat cells, releasing the lipids which are eliminated naturally through the lymphatic system.

As a medical procedure, Aqualyx can only be performed by doctors who have been specially trained in its use. Medcare’s medical aesthetics doctor, Dr Najma Hussain, is fully qualified and trained in the use of Aqualyx.

She explained why she introduced Aqualyx to Medcare: “We have been offering liposuction for many years and this is still a good solution for many patients. However, I was seeing men and women who were exercising and eating normally but who still had stubborn pockets of fat that would not shift. Many of these people did not want to go for a full surgical procedure like liposuction and were seeking a gentler approach.

“I was very impressed with the results doctors in the UK were getting with Aqualyx and realised it would be the answer for many of my patients.”

Aqualyx patients agree. Sharon Donaldson, 39, from Liverpool had the procedure last year to shift some stubborn belly flab and remove fat under her chin before her wedding. She had already lost two stone and dropped two dress sizes but was not getting the results she desired in her problem areas. She said: “I’ve finally got the body I’ve always wanted. I had spent years working in the gym and trying every diet you can think of to achieve what I have now.”

To find out more about Aqualyx and what it can do for you, book a free initial consultation now.