Words that never existed in Spain – until… 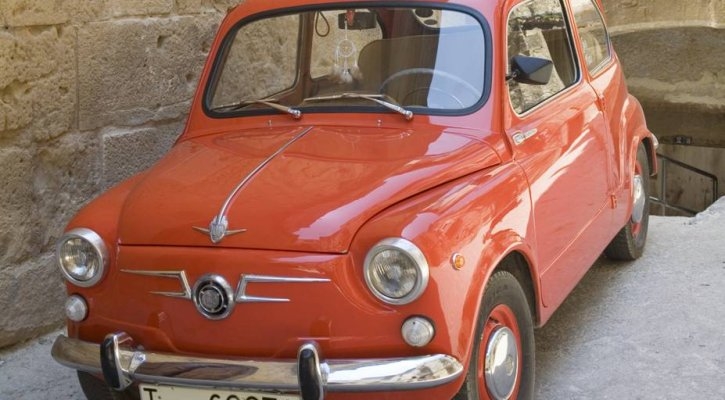 This is the exact type of car we first had, a Seat 600, but ours was blue.

LOOKING back on it all, I have decided that my life would have been lived a lot easier if I had known that certain words that I errantly carried with me while crossing the pond didn’t exist in use, action or philosophical thought in this country called Spain. Primarily amongst them is ‘Driving Etiquette.’

Now, you’ll shrug your shoulders and squeak: “Everyone knows that now.” But, be fair. Now is now and then was 45 years ago. Cars bouncing about the beach of Mojacar were as common as space ships to the Moon.

The roads were primarily owned by use of antiquity. That means burros and sheep had right of way and primary occupancy. Blast your horn you might, but all shepherds were genetically born deaf so would never hear you. Black frocked women lovingly holding the tails of their husband’s donkey as they sashayed home from market were also deaf.

My USA mindset had been created in having watched obstacles bolt out of the way of oncoming cars. Not so here.

I hadn’t taken into account historical ownership and Spanish ‘pundodor’ (dignity) of greater value than possible injury or even death.

The other formal culprit for mucking up an important day’s scheduling is the guy that stops to talk with his neighbour, Paco, who he hasn’t probably seen for at least 18 minutes. They both need to know what the other has been up to, what the other has seen, or gossip that has been gleaned while making the distant journey to the other side of town.

Damn I would get furious. It was an emblematic thing for Americans to be constantly busy, preoccupied, buzzing here, leaping there and never noticing the scantily clad damsels strolling along the way.

Issues of mailing a letter, meeting a plumber at exactly 10 so that you could harangue him about how long you’ve been waiting (which was as important to him as the colour of last week’s underwear). If, he showed up at all.

Worse was to be experienced by my wife who was an accomplished driver. It was an unheard of rarity for any woman to drive, as common as sheep behind the wheel. No right of passage was yielded to her, ever. Well, until it happened twice. She stood her ground and wouldn’t back up for 20 ton lorries. She didn’t back down.

I was often forced to witness gargantuan drivers fall to their knees begging to be let by her Seat 600 which wasn’t as large as the tyres of their lorries.

It was a time honoured dignity thing for the Spanish man not to ever back down, unless of course they met that little blue car of hers.

Changes were made in the etiquette in our area fairly quickly. Why I swear even the sheep would part like the red sea when that tiny car came humming around the corner.