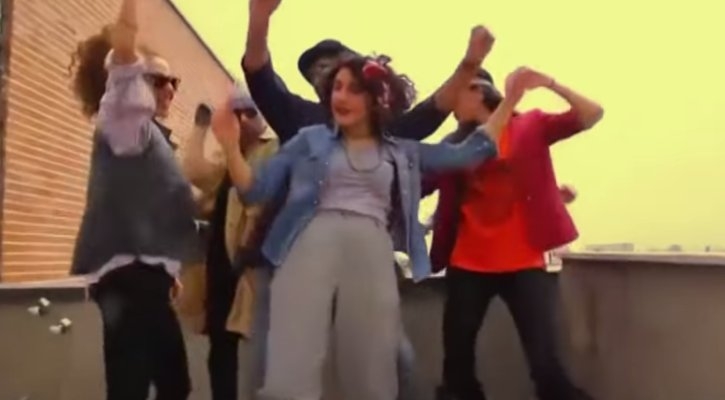 A TRIBUNAL in Iran has condemned six young Iranian men and women to prison and the lash for filming their own version of Pharrell Williams’ YouTube success ‘Happy.’

The youths were charged with ‘producing a vulgar video’ and ‘maintaining illicit relations,’ and will each receive 91 lashes and six months in prison. One of the young women, Reyhaneh Taravati, has received a sentence of one year in prison.

Although the punishment has been suspended for the time being, the youngsters are still not in the clear, according to their lawyer Farshid Rofugaran, who is still waiting to receive official notification of the suspension.

He said: “A suspended sentence becomes null and void after a determinate period of time.

“When the sentence is suspended, the verdict is not carried out, but if the accused commit another crime, then the full extent of the law will be applied.”

In the case of the youths known as the ‘Happy Group,’ the period of their suspended sentence has been set at three years.

The six were arrested in May after their version of Williams’ ‘Happy’ – considered provocative by the moral standards of the Islamic Republic – went viral.

The video shows the group happily singing the song on the streets and terraces of Iran’s capital Tehran.

Unfortunately for the female participants, they featured in the video without wearing the obligatory headscarves or figure-disguising clothing imposed on Iranian women.

Furthermore, dancing with men is a serious violation of Iran’s moral code: especially in public.

After their arrest, they were granted bail, and two of the youths appeared on Iranian state television alongside Iran’s Chief of Police, Hoseyn Sayedinia, to apologise for their behaviour.

Sayedinia warned that any copycat videos would be dealt with severely, but so far at least three other groups of young Iranians have released their own ‘Happy’ videos.

EWN says: The news emerging from Iran is troubling to say the least. Thank goodness that the sentences of these young men and women have been suspended, and let’s hope that they stay so.

The fact that this case was brought to trial in the first place, illustrates just how much work needs to be done on the road towards gender equality.

If the video had shown six men dancing and singing, we doubt that the Iranian police would have even noticed it.

That women were involved, dancing freely and dressing freely, is the reason why Iran’s powerful men felt outraged.

How can it even be possible contemplating giving over 90 lashes to a woman, purely for letting her hair down and dancing?

Until society is educated to the fact that a woman’s body is owned by no one but the woman herself, the Euro Weekly News will continue our campaign for equality.