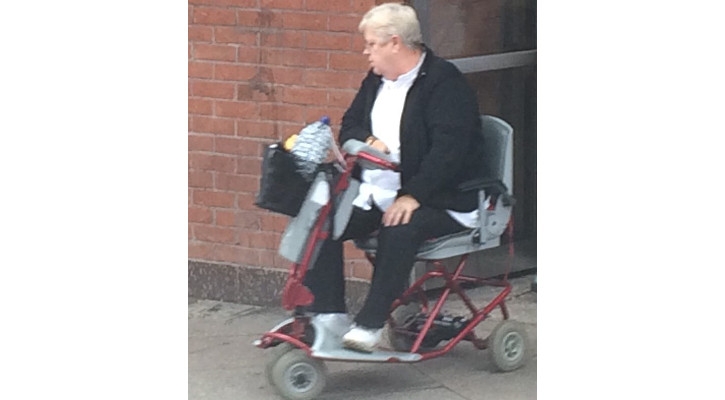 SUSAN BARRINGER, the benefits cheat who claimed more than £20,000 (€25,000) in disability allowances, and then moved to Spain, was spared jail today at Sheffield’s Crown Court.

The 56-year-old cheat, who arrived at court on a mobility scooter, starting claiming ‘disability’ in 2001 because she was ‘almost unable to walk.’ However in 2004, Susan from Waterthorpe, Sheffield, relocated to the Costa del Sol but failed to inform the authorities that she had moved abroad.

She continued to claim her disability allowance for three years whilst she was living ‘on the sun soaked beaches of the Mediterranean.’

Patrick Palmer, prosecuting, told the court that an investigation was launched after her bank accounts showed she had been spending money abroad. She was also found to be using a mobile phone in Malaga, southern Spain.

Her defence lawyer said she was a hard working woman who had to look after her elderly mother.

The judge told her, “You were not, in essence, living in this jurisdiction since 2004. You were no doubt fully aware you must notify a change in circumstances whether or not you were resident in the UK.

“You clearly chose to ignore that by not reporting these changes. When interviewed you told deliberate lies to the officer investigating.”

Judge Recorder Ray Singh handed Barringer a 12-week jail term, suspended for 18 months, and made her the subject of a curfew from 9pm to 6am every night

This case, mirrors many other like it on the Costa del Sol. In 2009 a British family from Salford, Manchester were busted in Mallorca after pretending they were too sick to work, receiving €145,000 worth of false claims.  They were caught when photographs of them enjoying a sunny boat ride were seen by fraud investigators.

The total cost of benefit fraud committed by UK benefit recipients living in or travelling to countries abroad is an estimated 70 million euros a year, meanwhile our pensioners, who have worked hard all their lives cannot afford to survive.

Residents in expat areas can report suspected British benefit fraudsters to a local number and their concerns will be passed on to a team of investigators in the UK.

It is free and confidential and operates from 8am to 4pm, Monday to Friday. The hotline is funded by the Department for Work and Pensions, working with the Foreign and Commonwealth Office. There is also a website where suspected British benefit thieves can be reported: www.dwp.gov.uk/benefit-thieves-spain

We urge readers to help put a stop to this. While many feel that “blowing the whistle” on a fellow expat is distasteful, we should pose the question, must we tolerate the illegal fraudsters taking advantage of the system at our expense?