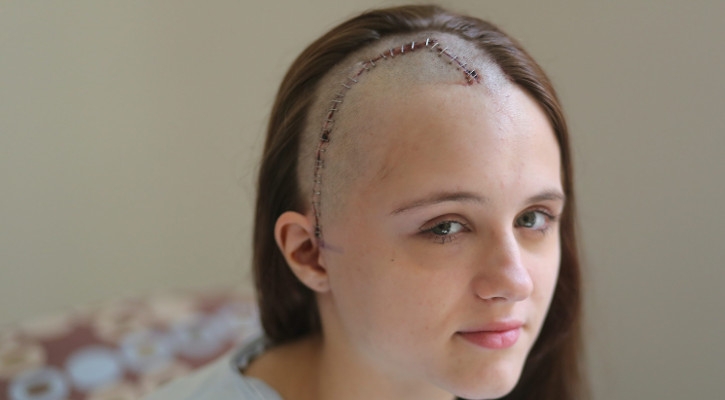 Sophia Putney-Wilcox is recovering from injuries.

A TEENAGER in the US has been left with horrific head injuries after narrowly escaping an attack by her ex-boyfriend in her own home.

Sophia Putney-Wilcox, aged 17, was attacked by her ex on Monday September 15 in her home in Michigan, USA.

Adam Shigwadja, who used to be Miss Putney-Wilcox’s boyfriend, who is reported to have broke into her home with a knife, and attacked her in her bedroom, setting the room on fire.

Her brother, hearing noises, managed to intervene and fended off the attacker with a baseball bat. Shigwadja escaped through a window, but was apprehended by the police the following day.

Miss Putney-Wilcox was left seriously injured after receiving an accidental blow to the head from the bat. She is now recovering in Bronson Methodist Hospital in Kalamazoo after receiving multiple stitches for a head wound.

Shigwadja is to face charges of attempted murder, arson and home invasion.

This was not the first time that Shigwadja has attacked his ex, however. On February 20 2013, he assaulted her in her home for the first time, holding a knife to her throat and trying to force her to accompany him outside.

After the incident, Shigwadja was bailed for 10,000 USD (€7,700) and warned to stay away, but Miss Putney-Wilcox was denied further protection, even when she asked for it.

She is sharing her story in the hope that it encourages more women suffering from domestic abuse and violence to come forward and seek help.

Speaking to Mlive, she said: “All [the victims] have is the abuser making threats. Nobody will want you, nobody will believe you.

“And you won’t speak out until you decide that you are better than that and learn to really love yourself.

“I want to let girls know that they don’t have to go through it. You deserve so much better.

“Every single person deserves better than what I went through and a lot of women are going through.”

EWN says: Once again, we see a clear example of a man thinking he can ignore a woman’s wish to end a relationship, and resorting to violence in order to exercise his control.

The fact that it seems the legal system ignored Miss Putney-Wilcox’s request for protection, only serves to emphasis the feeling of isolation and powerlessness that many women feel at the hands of their abusers.

EWN applauds the courage that Miss Putney-Wilcox is showing in coming forward and sharing her story, so that other victims of domestic violence may be inspired to seek help.