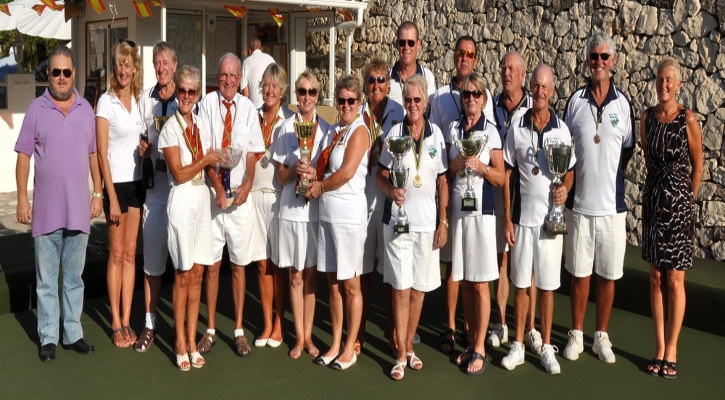 Spectators were treated to 11 days of superb bowling often under gruelling conditions as unseasonably hot temperatures reached into the mid-30s.

Even though many individuals had to play two matches a day and timings had to be altered on a daily basis to accommodate individuals who were successful in several disciplines, the competition ran smoothly thanks to the efforts of Competition Secretary Allan Travers and his wife Judy, whose administrative skills were so efficient the results of matches were often posted before the teams had put away their woods.

On the last day supporters turned out in force to add great atmosphere to tension-charged finals and spectators saw some close games, as in the case of the Ladies Rinks when Maggie Lawley’s team went into the last end 5 up but found themselves 6 down in the head and with the last bowl of the match Maggie coolly drew third wood to lead her team of Christine Mawson, Sheila Lucas and Mary Cockell to victory against Ritva McAuliffe, Felicity Jenkins, Diane Wynne and Jill Nobbs.

The Mens Rinks were also nip and tuck with the winning team of John Pittaway, Dennis Reeves, Dave Gardiner and Clive English just pulling away at the end to beat Jonathan Barr, Doug Bacon, Louis Symonds and Paul Leeder.

Wendy Symonds lifted the Ladies Singles title in convincing style against Maggie Lawley, whilst the Men’s Singles between Alan Phillips and Tony McKenna proved a crowd pleaser, as first one player then the other took the lead before Tony emerged victorious after 24 ends.

Particular mention was given to the Mixed Trips team of Joe Schulein, Chris Foreman and Chris Salter, who reached the quarter finals beating two very good teams along the way, earning them a special award.

Player of the Tournament was another relatively new bowler, Brian Walker, who in his first major competition reached the semi finals of the Men’s Singles beating two strong opponents on the way before narrowly being beaten by Alan Phillips.