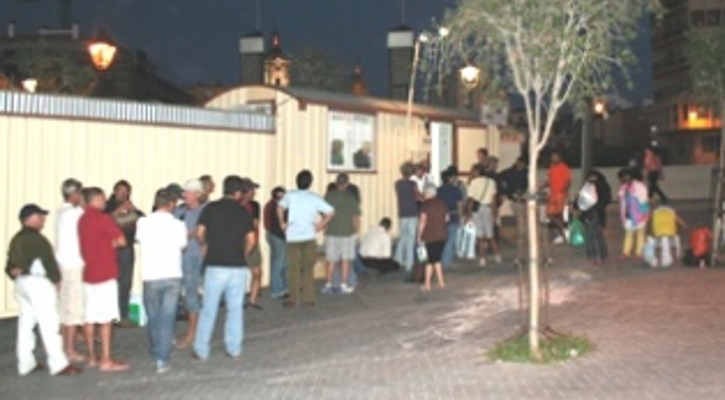 The association “Angeles Malagueños de Noche” (AMANO) is making a very big effort at helping the needy all from a small shack in El Pasillo de Santo Domingo in Malaga. This charitable association provides sandwiches and beverages such as milk, juice and coffee to people in need, daily, from 5.30pm to 9.30pm.

The workers of AMANO are all volunteers ranging from lawyers to grandmothers and they prepare and distribute food and drink to more than 500 people every night. Five or six volunteers work shoulder to shoulder in a shack-sized hut preparing around 1000 sandwiches, 500 go-bags, and 600 glasses of milk, juice and coffee.

The association welcomes and encourages donations from the public, businesses and other organizations. They gladly accept donations during their hours of operation and they are in need of anything that goes into sandwiches, other go-bag goodies such as chocolate, fruits, cheese etc. also beverages such as juice, milk, coffee etc.

Thanks to LA CAIXA, AMANO also does donation pick-ups with a small food truck they now have. They are available to come pick up your donation at a nearby school, university or at your business (locations pre-determined).

The volunteers at AMANO are aware that they not only offer food, but also a boost to people’s self-esteem. Part of their objective is to make the people feel like they are part of a community. Some of the folks that come to them lost, and without a compass so to speak, have found their way, some have succeeded in finding a job.

What really reflects the helpfulness of this association is the 15 per cent of volunteers that were once recipients of aid from AMANO that are now part of the association. In general, the volunteers feel that they are compensated enough with a simple smile. Many of the people who receive aid from AMANO give back by helping maintain the hut and the area around it clean. AMANO is very grateful for the amount of support it has received from the public and the local businesses in Malaga.

A separate organization called Entre Todos Podemos supported by many local artists in Malaga including Pablo López, Antonio de la Torre, Diana Navarro, Merche, Javier Ojeda, and Nuria Fergó to name a few, has begun to raise funds for AMANO. Their objective is to raise enough funds to build AMANO an adequate dining hall and kitchen. Entre Todos Podemos believes that a charitable organization such as AMANO, with the amount of people that it helps daily, should be operating out of something bigger than their current shack.