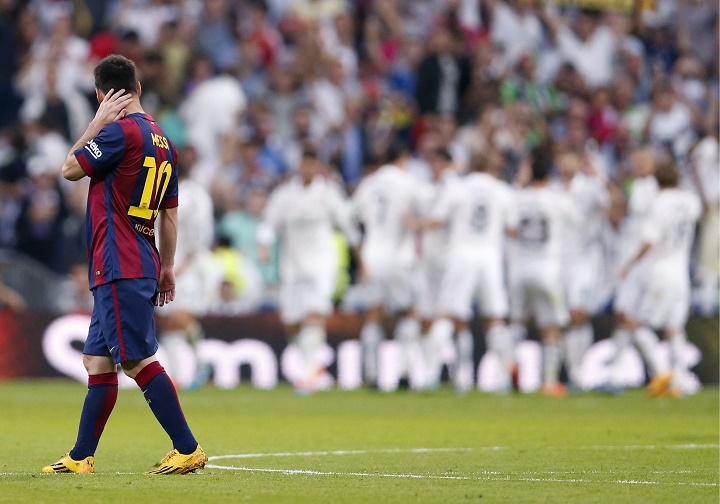 BARCELONA were the talk of the Spanish press this weekend after a dreary defeat at the Santiago Bernabeu against bitter rivals Real Madrid.

After a fantastic start to the game with Neymar putting Barcelona ahead with the first goal after just four minutes, equalling the record for the fastest goal scored in an El Clasico game in Madrid, it seemed as if Barcelona’s ambition and quality of play completely disappeared soon after.

Giving a penalty shot to Ronaldo can only end in tears. Careless Pique decided to block a ball heading to Marcelo with his arm, thus leaving the referee little option but to let Cristiano Ronaldo shoot the ball past Bravo obtaining the much needed early equaliser for Real Madrid, and it only went downhill from there for Enrique’s side.

Although young Neymar had a stunning first goal and Luis Suarez, who started for Barcelona for the first time after his ‘biting ban,’ was actually playing very well, it was the rest of the team that weren’t pulling their weight with Lionel Messi nowhere to be seen for the vast majority of the game, apart from obtaining an early yellow card for fouling Tony Kroos and missing a spectacular opportunity after 23 minutes. Pique was clumsy, and Mascherano looked like he would rather be in bed.

Due to the lack of focus from Barcelona, this allowed Real Madrid to take advantage of every mistake made as following Ronaldo’s penalty shot, a hefty header from Pepe put Real Madrid ahead. Another goal followed shortly by another spectacular shot from Karim Benzema after 61 minutes, who is proving his skill and ability a lot for Real Madrid recently following his two goals at Anfield last week.

Real Madrid fans were more than delighted at the Bernabeu, as their side were the first team to actually beat leaders Barcelona in La Liga this season, putting Carlo Ancelotti´s side just one point behind them with the hope of knocking them off the top spot in the table, much to the disappointment of Barcelona fans.

If that wasn’t enough salt being rubbed into the wounds of the Barcelona players, the three goals that were scored during the game were also the only three goals conceded by Barcelona making Ronaldo’s penalty the first goal to be scored in their net this season, we’re sure Messi is delighted.