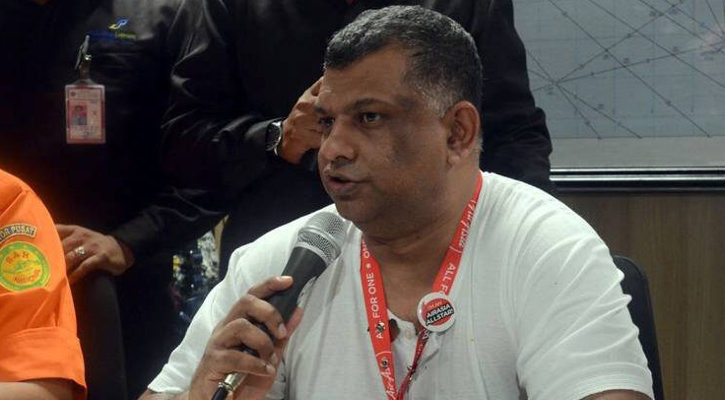 UPDATED: A Navy spokesman has said that 40 bodies have now been retrieved by the warship Bung Tomo and the number is growing.

Indonesian National Search and Rescue director SB Supriyadi has confirmed that bodies have been recovered near where the AirAsia flight went missing and the airforce has spotted a shadow on the seabed which could be the plane.

The bodies – which were not wearing life jackets – were found about six miles from the spot contact with the plane was lost and brought on board a navy ship.

Large items spotted resembling an aircraft door and emergency slide were confirmed to be part of the missing plane by officials.

AirAsia boss Tony Fernandes said he was rushing to the scene and wrote on Twitter: “My heart is filled with sadness for all the families involved in QZ 8501.

“On behalf of AirAsia my condolences to all. Words cannot express how sorry I am.”

The Airbus A320-200, flying from Surabaya in Indonesia to Singapore, disappeared from radar on Sunday minutes after a request to gain altitude to avoid a storm was turned down by air traffic controllers.

Passengers on board included one British man, Chi Man Choi, and his two-year-old daughter.

Air traffic controllers lost contact early on Sunday morning with an AirAsia flight from Indonesia to Singapore with 162 people on board.

Mustofa explained that the plane – which was due to arrive in Singapore at 8.30am local time – had asked for an unusual route before losing contact with the Juanda International airport in Surabaya, Indonesia.

A statement from AirAsia said that 138 adults, 16 children and one infant were on board along with two pilots and five crew members.

Although the airline declared that 156 of the people on board were from Indonesia, three from South Korea and one each from France, Malaysia and Singapore, the British Foreign Office said that one British national was on board and their next of kin had been informed.

The Airbus A320-200 with registration number PK-AXC was flying at 32,000 feet over the Java Sea according to air traffic control website Flight Radar.

The Malaysia based airline posted a statement on its Facebook page informing that contact with the flight had been lost and promising to keep all parties informed as more information became available.

Search and rescue operations are in progress and the airline has set up an emergency call centre for family and friends of those who may have been on board the aircraft.

AirAsia co-founder and director Tony Fernandes, who is also chairman of QPR football club and UK-based F1 team Caterham, tweeted a short statement saying: “My only thoughts are with the passangers and my crew.

“We put our hope in the SAR operation and thank the Indonesia, Singapore and Malaysian governments.”

He added: “On my way to Surabaya where most of the passengers are from as with my Indonesian management. Providing information as we get it.”

Meanwhile the Singapore Civil Aviation Authority said: “The Singapore Rescue Coordination Centre has offered help to the Indonesian authorities. Two C-130s are already on stand-by for this purpose.

“Crisis Management Centres have already been activated. We are working with the airline’s crisis management team. A waiting area, and all necessary facilities and support have been set up for relatives and friends of the affected passengers at Changi Airport Terminal 2.”