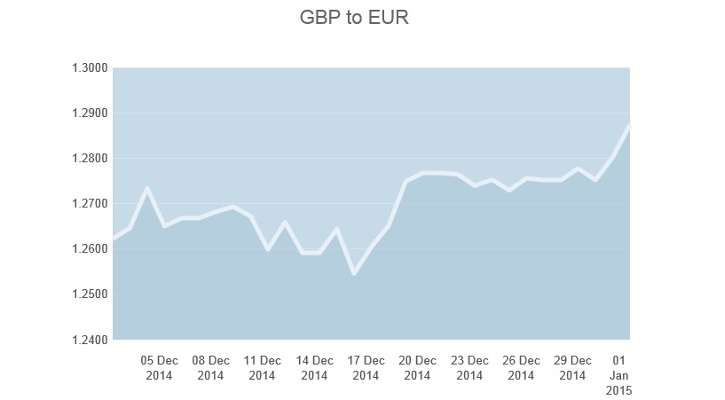 THE Euro started the month of December on fairly steady ground as markets turned their focus on the European Central Bank interest rate decision and press conference.

As inflation numbers from the Eurozone had not seen much of an improvement for the last two quarters, economists and investors were expecting Mario Draghi, President of the European Central Bank to announce the introduction of a quantitative easing programme to kick start growth.

However, interest rates were kept on hold and policymakers in the Eurozone hinted that the purchase of Government bonds could help address the issues swamping the region to drive growth, though no action was taken.

On the contrary, ECB member Nowotny issued a statement saying that although the Eurozone is experiencing a massive weakening and have very few options open to them, measures like full blown money printing, used by their counterparts in the US, will not be suitable for the region.

Markets began to price-in that the ECB will announce a stimulus programme in early 2015 after Mario Draghi addressed the European Parliament.

With Europe on the brink of yet another recession, Draghi issued a statement saying that the European Central Bank could start buying government bonds. He also stated this would be one of the measures in the European Central Bank’s armoury as they could further implement uncon-ventional measures to purchase a ‘variety of assets’ including gold and securities. Retail sales and manufacturing PMI numbers are also steadily on the decline, while GDP data continues to paint a grim picture for the Eurozone economy. The Euro has steadily weakened since and after dismal economic data prints, GBP/EUR that started the month at 1.2590 has lost considerable ground to end December just under the 1.29 level.

The fate of the Euro is now dependant on Mario Draghi’s stimulus programme which is expected to be announced at the ECB meeting in January as he tries to kick start growth and inflation which has remained considerably poor. With diver-gence in policies among the major economies it is imperative the European Central Bank need to act; though they may have left it a little too late.

Low inflation numbers and monetary stimulus devalue a currency and ending the year on a weak note, one thing is certain – the Euro finds itself wedged between a rock and a hard place.