UPDATE: Sieges over and some hostages freed 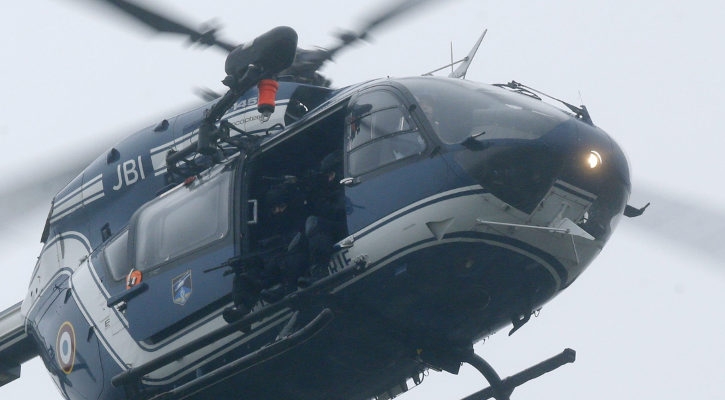 UPDATE: AT LEAST four hostages and jihadist gunman Amedy Coulibaly were killed during a police raid on a Paris supermarket siege.

A total of six explosions were heard at a Jewish supermarket in Porte de Vincennes and hostages were seen to run or be carried out, including a small child.

Police are reported to have taken the opportunity to raid the premises while the gunman was on his knees carrying out his prayers.

Although initially it was hoped that all the hostages had survived, it was later confirmed that four had  lost their lives and many were seriously injured during the raid, in which two policemen were also hurt.

The hostage-taker was linked to the Charlie Hebdo terrorist brothers who died this afternoon near Charles de Gaulle airport after another siege and told a French TV station that he was a member of the Islamic State group and the brothers were his ‘officers’.

After the drama ended, French President Francois Hollande and Interior Minister Bernard Cazeneuve praised the bravery of the French police.

Mr Hollande declared that France had demonstrated, and would continue to demonstrate, that it was not afraid of terrorism.

In press conferences in Paris after the drama, France’s president Francois Hollande and Interior Minister Bernard Cazeneuve praised the bravery of police.

Before the supermarket raid, brothers Cherif and Said Kouachi were killed and a 26-year-old man who had been inside the premises in Dammartin-en-Goele they had shut themselves inside freed.

A helicopter which had been hovering nearby reportedly landed on top to the industrial building during the raid and bursts of gunfire and explosions were heard.

Police commandos surrounded the premises and attempted negotiations with the men, who are suspected of being the gunmen who killed 12 people in an attack on satirical magazine Charlie Hebdo on Wednesday (January 7).

Police had launched a massive manhunt centred on a forest 50 miles from Paris after a petrol station in the area was robbed.

Then the terrorists hijacked a Peugeot 206 and headed back towards Paris on the N2 followed by a convoy of police and media before they entered the business premises and took the hostages.

It has been revealed that the Kouachi brothers have been known to the authorities for their extremist views for 10 years, and were both on an American no fly list.