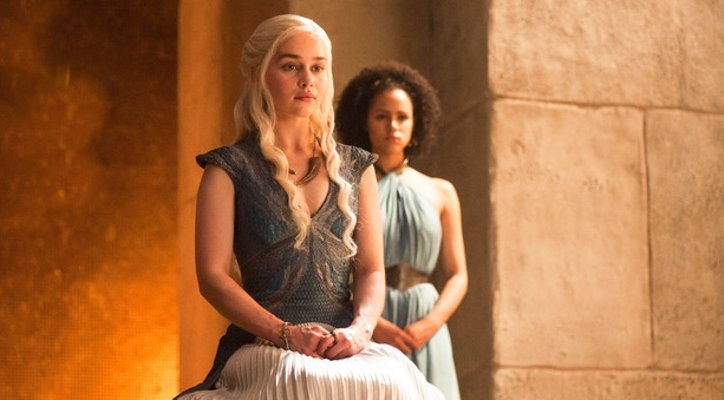 SKY ATLANTIC has announced a return date for Game of Thrones. The fifth season of HBO’s epic fantasy drama will launch on Monday, April 13 at 10pm (CET). HBO confirmed that Game of Thrones will return on April 12 in the US, meaning that UK fans will have to wait less than 24 hours to see the new episodes.

Much of the new season is set in Dorne, with production moving to Spain for scenes set in the Red Viper’s homeland. New cast additions include Jonathan Pryce and Alexander Siddig, as well as newcomer Nell Tiger Free taking over the role of Myrcella Baratheon. Meanwhile, a Game of Thrones Exhibition has been announced for The O2 in London, as the first location of an international tour. It will include new installations, nearly 70 original artefacts from the series, and select pieces from the upcoming fifth season.

The former model and TV presenter has been drafted in as a replacement for Sally Bercow, who was forced to pull out after fracturing two ribs during training.

She is now in Austria to begin training for the winter sports competition. Strictly Come Dancing professional Ola Jordan was also sidelined by injury, and has since been replaced by Chloe Madeley.

Earlier this month, Louie Spence stripped off for a photo during a break from training, while Joey Essex posted a group selfie from the slopes. JLS singer JB Gill, Made in Chelsea’s Louise Thompson, socialite Lady Victoria Hervey, Heather Mills and Stacey Solomon will also take part in the new series. The Jump returns to Channel 4 in early 2015.

If you would like me to answer any questions you may have on satellite TV or to expand on anything I have written about, please call me on 678 332 815 or email [email protected] I look forward to your comments and questions. Don’t forget to listen to my radio show every weekday from 10am on Spectrum 96.1 & 106.8FM, now covering over 2000sq kms of Costa Almeria and Calida or listen online at costaalmeria.spectrumfm.net for the latest news and views from the world of satellite television.