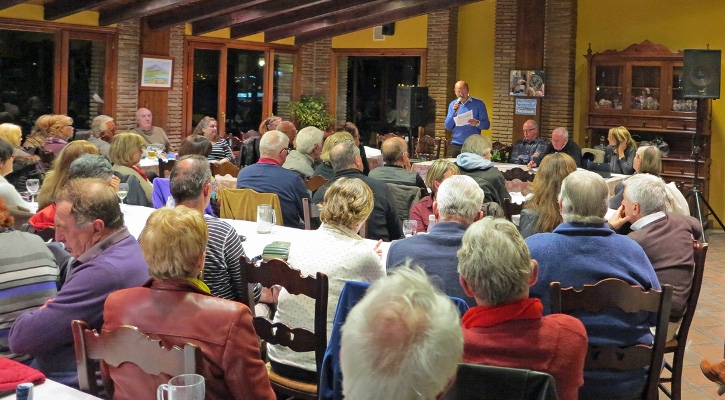 A PRESSURE group of owners of ‘illegal’ homes of Axarquia, SOHA, has received a massive response after their last meeting in La Viñuela.
The meeting’s main goal was to decide whether the group should participate in the next municipal elections as an independent group or join previously existing political groups to do so.
SOHA members decided to link their political efforts to centre-left, non-nationalist party Ciudadanos in towns Alcaucin and La Viñuela. They will also be able to stand candidates in Velez-Malaga, Canilla de Aceituno, Cutar or Areans, under other political parties such as conservative Partido Popular (PP).
“We feel stronger than ever after more than a decade fighting for our goals,” said SOHA spokesperson and councillor in Alcaucin, Mario Blancke.
Mr Blancke stood in the last elections with party Los Verdes (Equo) and will lead the candidacy for Ciudadanos in Alcaucin.
According to the group, the reasons behind the decision to join Ciudadanos were as follows: “The various options considered by the committee were: putting SOHA members on the lists of the two main parties, standing as SOHA independently from other parties or forming an alliance with Ciudadanos.
“While standing as an independent SOHA seems like a good idea, the difficulties of setting up a new political party, changing SOHA’s constitution and the challenge of attracting Spanish voters leads us to believe that an alliance with a new party like Ciudadanos seems like the preferred option.”
Although SOHA is formed mainly by expats, many local Spaniards have shown their willingness to join the group in their newly created political career.
“What we are trying to achieve is going to benefit all citizens and towns, as what the current government has offered us is, financially, a disaster. We have to keep asking for unity, because we are now closer than ever. We cannot leave anyone behind because this is a political problem and the modification of the law is highly necessary,” added Mr Blancke.