Not looking back – whatever the consequences! (Part Two) 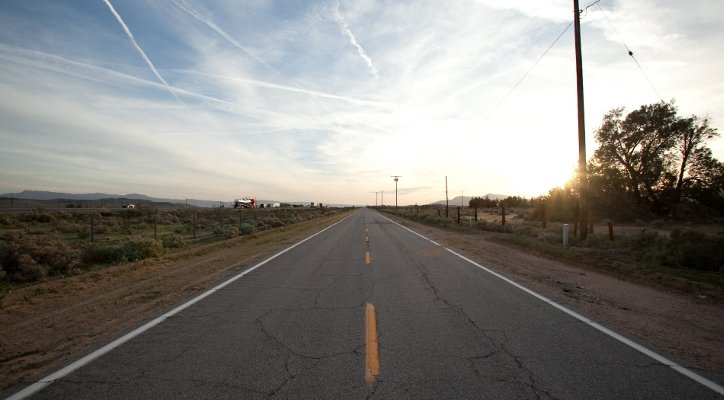 THE OPEN ROAD: Lost, but pressing on for MO-JAW- KAR.

WE waited an hour. I stood outside with buoyant anticipation but no one came.

I started getting jumpy and returned to that most cherished spot on the planet wherein some English had been mumbled. Before I could utter a word, she spoke: “He lives in Mojacar,” the rent-a-car goddess blurted. “It isn’t far. About an hour and a half. The paved road takes you directly there.”

I could have kissed her for such welcome news. I started to show her my driver’s licence and she said she’d put the bill on my brother for not picking us up. Damn, things were really breaking better! She then walked me out to a car so small I thought it was a sadistic joke played upon tourists. But, when she handed me the keys it all became real. We put our luggage and baby in and off we whizzed into the most barren landscape I had ever seen. Karen finally broke the silence: “My God, how do these people survive? What do they eat or grow? There is nothing here but sand, rocks bushes and cactus.” A bleak summarisation that equalled my mutual but secret sentiment. But, I couldn’t agree without letting down my guard. After all, I was leading the charge. She was right, we were far from home, far from Iowa’s rolling, verdant landscapes. The future indeed appeared bleak.

Crossing my first riverbed I went wrong, driving directly opposite to the other side. There was a dirt and gravel pathway leading in the direction of the hills we had been travelling. I was supposed to know that once in the riverbed you had to turn right and drive down it for about a mile, then turn left and you’d be back on the asphalt. But, my mind hadn’t learned the art of Spanish premonition (something I haven’t yet conquered following 47 years of failed attempts).

Now, I was lost in low hills and steadily climbing. Using my Boy Scout knowledge, I searched for the road most trodden, assuming it would lead me somewhere.

But, the higher we climbed the fewer adobe farmhouses appeared. People would rush out waving their arms to either bid us off or welcome. Damn peasants, none of them knew where MO-JAW-KAR was. The wife gave me that stare again. So, I bolted onward with a cavalier attitude.

Studying the worn paths for my best options I could only find hoofprints and not tyre marks. The higher up I continued the darker the residents became, sunburnt to a deep brown earthen colour and poorly clothed. Not one had heard of MO-JAW-KAR. (No wonder it wasn’t on the maps!)