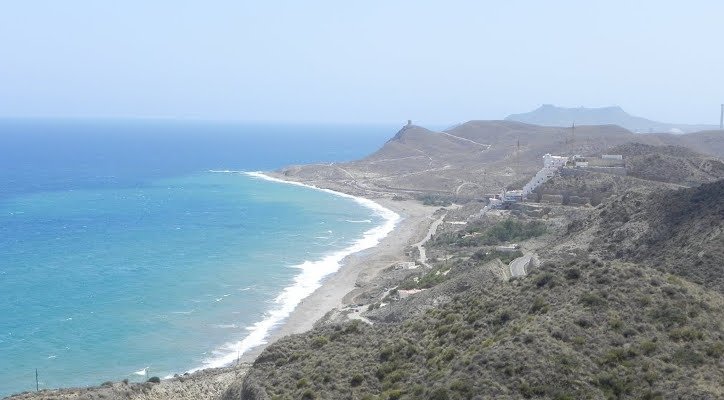 INSPIRING: The blue sea sparkling in the sunshine lifted our spirits.

I HAD to finally admit that once leaving the airport and following the road ‘straight to Mojacar things had unravelled. I was lost and would have to relinquish all manly privileges and turn back.

Soon I came across a big flash car and a man wearing a chauffeur’s hat driving. I flagged him down and enquired, but he too had never heard of Mo-jaw-Kar.

Finally in desperation I thrust the written word at him and he beamed at me, laughed, and waved for me to follow him, which eventually led us back to that riverbed and then a procession down it and up again it until he landed us back on asphalt.

He waved me off smiling and laughing just as if we had given him something to tell his wife. Getting through Carboneras was a nightmare as there weren’t any signs and those that were I had never seen before. Arrows pointing to the left meant straight on. Circular red with a white dash in the centre I discovered meant ‘don’t go there’. It did lead me to lots of interesting conversations. Lots of shouting, which is a thing I can do well. I couldn’t compete and reversed back. Finally getting to the other side of town the countryside became both beautiful and ancient. The blue sea sparkling in the sunshine lifted our spirits; rocks, older than time itself, seemingly assured us we were on the right road. On we plugged up a twisting paved road not wide enough for two cars. Iowa wasn’t like this or anywhere we had ever been. The true adventure was controlled by chaos and confusion; up we went higher and higher. At the top we stopped and got out of the car. As we gazed at the serpentine pathway, the scene was surreal and left us breathless and worried. Where could we be going? Terra Incognita as the old explorers exclaimed.

“There be dragons over them hills,” I slyly whispered to my wife, hoping to erase even the smallest tension. Then we sped off downhill toward whatever could await us. Pitfalls and failures might be ahead, but we most certainly weren’t turning back now.

Our journey took just over six hours and was sheer adventure every moment. Arrival day had ended and we began a new life, walking towards a definite, unknown infinity.