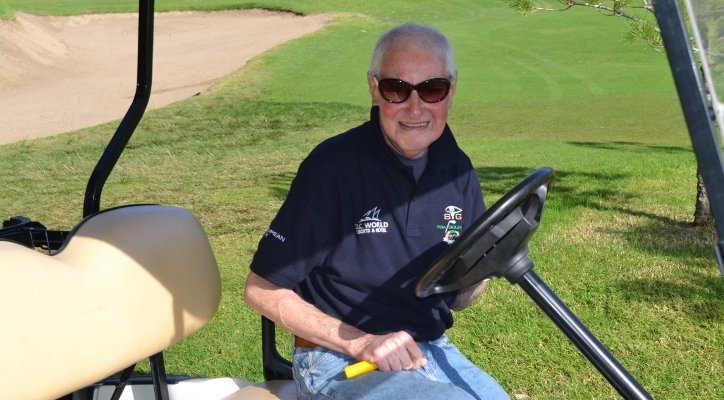 THE Costa del Sol is in mourning at the passing of Jack Nusbaum, who died on Monday (February 2) in the Cudeca hospice.

He was 88-years-old and had been diagnosed with cancer. Jack was a tireless charity worker for decades on the coast and was instrumental in organising events for a number of different associations and charities. He was long associated with cancer charity Cudeca and was founder of the non-profit charity Sight Impaired Golfers Association (SIGA).

Jack, a retired advertising agency owner originally from Boston, USA, moved to Torremolinos more than 25 years ago and worked as the publication director of one of the first golf magazines on the Costa del Sol.

He was a central figure in the world of charity work on the Costa del Sol and was instrumental in the success of Talk Radio Europe (TRE) Telethons over the years. SIGA was the first golf academy to work with and teach visually, physically and mentally disabled people in Europe to play golf.

Jack was a dear friend to all at the EWN and worked with us on numerous campaigns to help those in need.

“Jack’s passing is such a huge loss to all on the Costa del Sol,” said Michel Euesden, EWN publisher. “He was such a big influence on so many and was a giant among men. He was always such a great supporter of the EWN and was a man who taught us all humanity.

“We are devastated by his loss and extend our heartfelt sympathies to his family. May the Costa del Sol community continue working effortlessly with charities in memory of Jack and to carry on his legacy. May he rest in peace.”

His work for SIGA was something very close to his heart, according to his friend, broadcaster Barry Nathan: “He said to me just a few days before he went into the hospice that he did not care what happened to him as long as he could do the SIGA July event. Sadly it was not to be. But I have been told that it will still go ahead.”

Barry added: “Jack was such a generous person – he gave everything he had away. He was just an amazing man who was always wanting to help the underdog.”

Echoing those thoughts was Vannesa Sanem, who met Jack through the TRE Telethon and Cudeca events. She said: “He was an angel, the last person he thought about was himself. He always put other people first and was a genuinely good person.”

Vanessa added: “It is sad he has passed on, but he had a good life – two lives in fact. His first was in the United States then his second here.”

For Jack, in the later years, SIGA and golf for the disabled was a shining light for him. At the last SIGA event he was involved with, at the Parador Golf Club in Malaga, he was still the driving force. Despite his obvious ill health and frailty, he was looking after the people with learning difficulties taking part. He was speeding around in his golf buggy, making sure everyone was alright and everything was running smoothly.

That extended to getting up early to make sandwiches for everyone to take round the course, a task that any one of a number of volunteers would have been happy to take on.

It epitomised the can-do, will-do attitude Jack brought to his – and other people’s – life.