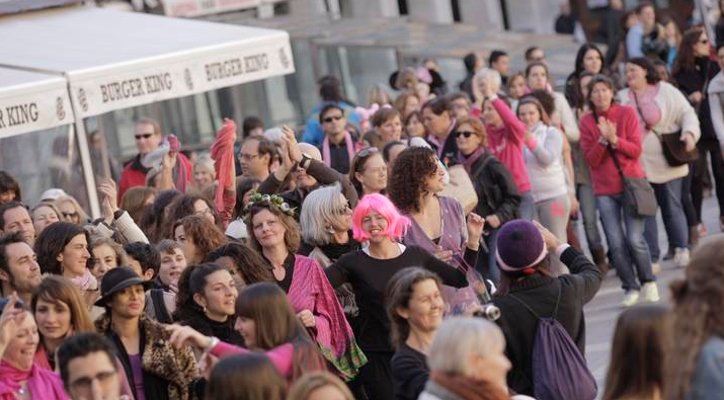 I MET Mariella Echeverri this week. She is the co-ordinator responsible for the One Billion Rising event in Palma which has happened for the past two years, and this year’s is going to be even bigger she says. One Billion Rising is a campaign to raise awareness for the continuing worldwide issue of violence against women.

It’s an opportunity for women and men to stand together and demand change. Here in Mallorca there will be a demonstration, gathering and public party on Saturday 14th February during the day in Palma de Mallorca.

Mariella and I huddle over steaming hot coffees whilst Palma shivers, what do you want to achieve from this? I ask her. “I want people to come away from the event asking, how can I help locally? Can I help my sister, my cousin, my neighbour? The real problem is that it is very difficult to get to the women who are already at risk, they are so scared and caught up in their situation they don’t know how to get out of it”. I ask Mariella why she organises the event every year, “I do it for my daughter. She is five. I want her to know that there is another way.” We talk about how even young girls are being pressured and influenced through social media and text messages, you don’t even need to be in the same room. “Young men are controlling their girlfriends by making them give them their passwords for Facebook, they are saying ‘if you love me then you will let me know everything about you, let me take that photo of you, it’s just for me, and they’re going to show their friends and bully and harass their girlfriends that way”. And then of course there is the use of physical and sexual violence against women to control and subjugate them around the globe.

If you want to stand up and show support for women across the world, and demand the end of violence against women then please attend the event. It will happen on Valentine’s Day, Saturday 14th February.

They will meet at 11.30am in Plaza Cort and then walk, dance, run, sashay and marchto Parc de la Mar. Mariella’s hoping they will be accompanied by motorbikes to “Make some noise” then then once the group arrive at Parc de la Mar (in front of the Cathedral) there will be a huge Zumba event, speeches and chances to get information. See you there.