Glitz and glamour but not real life 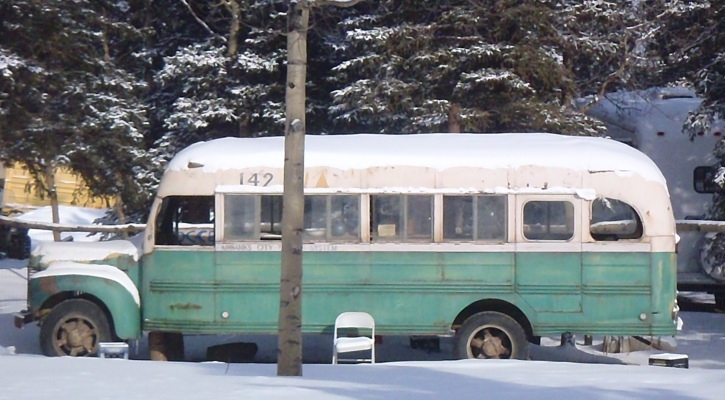 The bus in which much of the drama took place in Alaska.

IT’S the red carpet season. The cameras zoom in to view the plunging necklines and rising hemlines. The sky rains glitter and gold amidst a plethora of flashing strobes.

It is time to celebrate the good and glamorous (those who crave to be constantly loved and cherished) for pretending. Playing someone else, being another person, yet, modified for the leading role, shined up and polished taking away authentic sympathetic wrinkles or chipped teeth. All of this to listen to the ring of the cash register chiming musical profits. Faithfully bestowing upon the audiences the absolute solace and consolation they crave.

Hollywood knows what we want. Storyline hinting veracity just enough so that ‘true story’ can be stamped somewhere in the credits. Yet, there are stories of gargantuan human efforts rarely portrayed.

For example the movie Into the Wild is about a young man seeking meaning to his life. He gave up everything and rambled around searching. This led him to Alaska. The bus wherein he lived has become a cult symbol of pilgrimage for young people more concerned with the ideology of reinventing themselves first before following the usual well-trodden path of social acceptance. Movie viewers can live decades before any such individualism is portrayed on the silver screen. But, those that did ‘adventure far from the paved roads’ back then are now today’s heralded and admired.

But, a terrible logical reductum has moved into modern thinking causing many things to be shunned so as to keep the precarious balance of social equilibrium. It’s called Political Correctness and belongs exclusively to the unread, weak and uninformed. It is the trendy popular realm of living comfortably in your zone and not making waves or ripples.

I cannot for the life of me calculate why the wonders brought to light by the Spanish conquistadores have never been portrayed in a feature length film. Of course they committed wrongs. Yet the founding of something new and uncharted still remains stunning.

I want a movie that shows a man landing in an unknown kingdom, being defeated, fleeing for his life but not departing. A capitan having the ‘cojones’ to burn his own rescue ships that assured him a final escape, yet he returns back into the jungle. He’s gone to confront his enemies one more time. Hernan Cortez was his name and he is almost forgotten by history, other than tiny footnotes in obtuse historical reference.

I want a cinema with real stories about authentic people and with much less attention given to those that mimic the ‘strut and fret their hour upon stage’.

Actors yes, pretenders no. I require real-life dramas and not the blatant sparkling and explosive imitation.