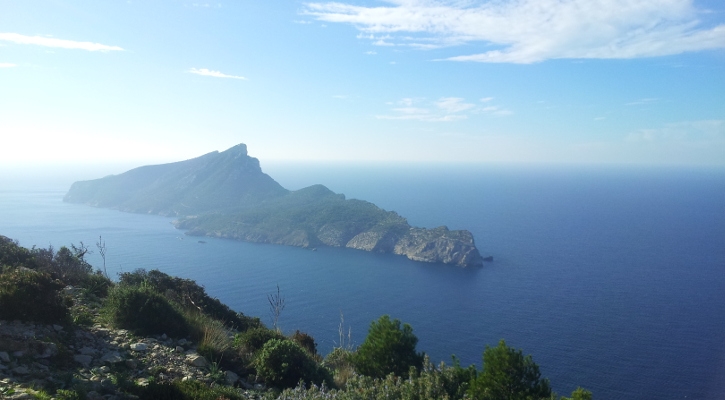 MOUNTAIN TOP: Steep and demanding, but the view at the top is quite amazing.

ABOUT a month ago my daughter, La Gidg and I went walking from Sant Elm up to the top of Sa Trapa and back down again. My husband was in Pollensa photographing a cycling team so we were one man down in Team Neilson McLeod, but that didn’t matter as we were out with a bunch of friends.

If you’ve ever done the walk you will know that there are some steep and demanding parts of it, but that it’s worth the ‘up’ as the view at the top is quite amazing.

Everything was very jolly, then as we were making our descent La Gidg slipped over. It was quite a heavy fall, and there were tears. I could see that there was some blood coming through her leggings but because they weren’t torn I assumed that it was a graze.

She didn’t want me to look as she is quite headstrong, so I decided that the best thing was to get back down to the car as soon as possible and then get ourselves to a doctor if we decided we needed one. There then followed two excruciating hours of slow hobbling down. In hindsight I should have insisted that I looked at her injury, and if I had seen it, I would have been on the phone to the emergency mountain rescue.

When we made it back to the car we went straight to the local PAC in Andratx. When I finally saw what had happened to my little girl’s leg and appreciated the level of bravery that she had shown getting down from the very top, I was completely speechless.

Her leg, despite no damage to her clothes, was cut from one side of her knee to the other, about 10 centimetres and about four centimetres wide. It was as if a special effects makeup artist had been practising on her.

‘Go to Hospital Son Espases’ was the decision. We were spoken to in English by our doctor when it became clear to him that I was in too much of a state to really concentrate in Spanish and then La Gidg, with the help of two doctors, three nurses and a bottle of gas to relax her, had 15 stitches put into her leg, and goodness knows how many more inside.

I know I moan about the cost of social security in Spain, and the unfairness of the system for autonomos and small businesses, but I cannot fault the hospital system. It was very good, efficient, well equipped and there when we needed it.

The after care has been great as well. Gidg just had her stitches out last week, and we are still some way from Hip Hop and Cross Fit classes, but her leg is still attached to the rest of her which makes us all grateful for small mercies.