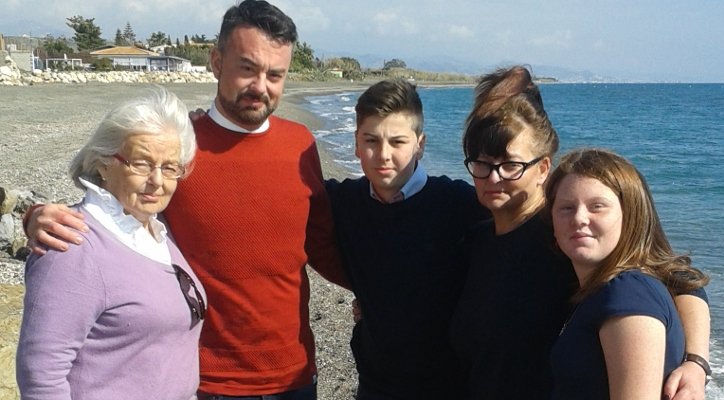 Toughest day of my life

I WAS diagnosed with breast cancer in August of last year, which was a tough time but little did I know the toughest day of my life was yet to come.

On Sunday, February 8, I received a call from a Guardia Civil traffic officer informing me that Angus Julian Russell Watson had died in a cycling accident. Angus had been my husband for nearly 17 years and the father of my children. We had recently divorced, which made things all the sadder.

Nothing can prepare you for a moment like this. Within a short time of receiving the call I had identified his body and signed for his possessions. I just could not believe it. Whilst at the Guardia Civil offices his mobile phone rang. Then I realised it was Oliver, our son, ringing his Daddy’s phone, wanting to know why he was taking so long. It was utterly heart- breaking. I did not answer the call. My head spun and my stomach twisted but now was not a time to buckle. I had to get to my children as soon as possible and tell them.

The children had been spending the weekend with their father and were at his flat. I pulled up outside knowing the children were inside waiting for news. I wanted to prolong their blissful ignorance of the abhorrent thing that had just happened and protect them but I could not delay one moment longer. Two expectant faces greeted me. “Daddy has had an accident, hasn’t he?” they said. I told them their father had died. It was the worst moment of my entire life. I have never heard such sorrowful crying. The pain was tangible, utter devastation. We held each other until we could cry no more.

I then had to ring his family with the terrible news. It was just awful. They had spent such a happy Christmas together and Angus had recently visited his father, who is very ill. No-one could believe it or take it in. His mother, brother and sister were over on the first available flight. His father sadly was too ill to travel.

The ensuing days were a whirlwind of organisation. In Spain, funerals are conducted within 48 hours of a death. This was very hard for his family as they just didn’t have time to come to terms with things. We had to arrange the funeral, invite guests, co-ordinate airport pick-ups, accommodation and flowers. It was all a blur.

It was decided, as Angus had lived in Spain for 16 years, that he should have his funeral here locally. At the eleventh hour his two lovely children from his previous marriage, Amy and Joshua, managed to get a flight over. It would be the first time that my children had met their half-brother and sister. I can honestly say that despite the pain it was a wonderful moment and provided us all with comfort and some level of relief because we were all running on empty. Oliver and Isabella instantly loved their brother and sister and the sentiment was entirely reciprocated. Having a big brother and big sister to put their arms around made all the difference.

The funeral was at 4pm on Thursday, February 12. The turnout was massive. People had come from England, from Comares, the Spanish village where we had moved to initially, and from Benajarafe, where we both had lived for the last nine years. A veritable army of Angus’s colleagues also came to pay their last respects. His brother James, Joshua his eldest son and his dear friends Steve and Andy were pallbearers. Oliver brought up the rear followed by myself and Isabella, his mother Elizabeth, his sister Linzi and his eldest daughter Amy. We had organised two ceremonies. The first being a Catholic ceremony out of respect for the Spanish attendees and the second a more intimate gathering for our English family and friends, although our Spanish friends were welcome too.

The English ceremony was extremely moving. One by one each member of the family and dear friends stood up and spoke from the heart about Angus. It was beautiful and I know Angus would have been so happy.

We went back to Benajarafe and had a bit of ‘morale’, as Angus used to call it. A glass or two was definitely required. We were completely drained but the following day would be a difficult one as his ashes were to be delivered in the morning.

We decided that Angus would not have wanted to be trapped in an urn. So we picked a beautiful rocky outcrop and scattered his ashes into the sea along with flower petals and almond blossom. Those of you who knew Angus will know he had a wicked sense of humour and could be quite a devil at times so it was no surprise to me that he refused to come out of his urn! It took us half an hour to prise off the lid. We had to laugh because it was almost impossible to cry any more. We watched as Angus floated off, we noticed, at haste in the direction of his favourite bar. My daughter said: “Look Daddy is off for a quick pit stop, i.e. a beer, and then off to England to see Grandpa.” I think she was probably right.

With his ashes gone we will put some special things in his urn and bury it in the garden so that the children have a place to go when they want to have a chat with their Daddy.

I finish by saying how outstanding my children are. Their behaviour has been exemplary. They were so strong on the day of the funeral, greeting all our friends and loved ones and holding it together when everyone around them was crumbling. I could not be prouder. Life is short and you never know what tomorrow holds so really appreciate each day. Chemotherapy is nothing compared to such a loss.

Goodbye, Angus, may your soul rest in peace although I suspect you will be bringing a bit of your own special brand of devilment to Heaven!