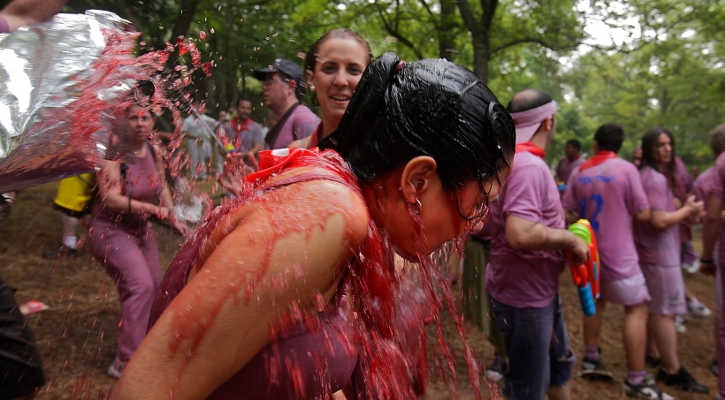 BY nine o’clock in the morning, Spanish time, I was half-man, half-marinade. I was completely pickled. My hair had turned a dark velvet and my clothes were spattered blood red. I gave off the unmistakable bouquet of blackcurrants and baked plums with maybe just a hint of cinnamon.

I was engaged in close-contact hand-to-hand fighting of the most enjoyable kind.

A man pressed a water pistol to the side of my head and asked if I liked ‘Rioja.’ Before I could answer he said “Hasta la vista, baby!” and shot me at point blank range. ‘Tempranillo’ grape juice trickled from my nostrils.

‘La Battala dos Vinos’ or ‘Battle of Wines’ takes place every St Pedro’s Day (June 29th) in Haro, the capital of the Rioja wine-making region of Spain. The town dates back to the 10th century and derives from a shanty town which grew up around a light-house on the Turon river and the Rio Ebro. The main attractions are the parish church of Santo Tomas, the baroque ‘Our lady of la Vega’ basilica and the neo-classical town hall.

The town is famous for its bodegas and winehouses like ‘La Rioja Alta,’ ‘Muga’ and ‘Roda.’ ‘La Herradura’ (the horseshoe) is the recommended route for a tapas and tippling crawl.

Northern Spain’s War of Wines, which lasts three hours and started in 1906, commemorates a 10th century property dispute between Haro and the neighbouring village of Miranda.  Over four thousand were involved in the mayhem last year.

Torrents of red wine poured past us as we trudged up ‘La Calle Navarre’ to the clifftop battlefield of Biliblio. Returning from the front, battle-stained survivors staggered by, their weapons emptied, their compulsory white shirts crimson. Some stopped to be sick by the roadside. The rocks looked like they had been used by firing squads.

In the old days, the ‘guerreros’ used to arrive by foot and horse. Now they come by car, caravan and tractor. Modern technology has improved weaponry.

Today, everything from fire extinguishers and pump-action high-velocity ‘Supersoakers’ cap-able of shooting a half a bottle of plonk in five seconds to water pistols, buckets and farming pesticide sprays are used in the mayhem. Everyone carries their own personal ‘bota’ or leather wine boot.

Everyone knows how to use their boot. It is every man and woman for himself.

The ‘Jarrilleros,’ as the locals call themselves because of their jam-making heritage, are born with their boots in their hands. They are great marksmen. They can hit a moving target at eight yards, firing from the hip with an ancient shepherd’s wine gourd. They are masters at boot-to-boot combat.

Fifty thousand litres of wine were fired last year. Mostly, it seemed at me.

The local council provides four litres per person. Most bring their own ammunition in the form of ‘Don Simon’ supermarket plonk.  Some prefer watered-down ‘Valdepenas’ from La Mancha. It causes greater and more stubborn staining. They don’t waste the ‘Roda 1 1995 Reserva.’

“It’s a fiesta intergalacticos,” said one wine warrior. He wore a pair of welding glasses and we took shelter together near the fifth century hermitage of San Felices, the patron saint of Haro.

He reloaded his boot from a large Coke bottle. “Pamplona is cosmo-politan and touristy. It is how you say…

He paused to give himself time to be erudite.

“This is local. The Bunol tomato fest is too big. Our battle is more personal. It is the ultimate wet t-shirt contest!”

It was the last thing he said before a braless woman shot him straight between the eyes.

Vineyard owner Felix Alonso is 82 and battle-hardened. He led the way from the tiny church overlooking the two rivers. Around every corner we were ambushed. Snipers picked us off. Our friend, teacher Edourado Alegria, was caught in the crossfire of expertly squirted Granache. He did not have a chance and was drenched.

We carried on down the mountainside to complete the traditional circuit. Thinking we had reached safety, we were strafed by a battalion of youths armed with ‘las bocas de las sulfatadoras,’ sprays used on vines.

The Battle of Wine spares no- one. Even your allies turn against you. I had gone into battle with Pedro Ortega, who owns the ‘Senorio’ hotel in nearby Brinas. We ate our lunch below the battlefield. It was snail stew followed by potato hash Spanish omelettes.

“These are the good moments in life,” said Pedro. “Food, drink and many, many happy people.”

Then, raising his boot and squeezing gently, he shot me in the mouth.

Then he offered me some cherries, picked that morning.

For more info about the War of Wine (La Batalla del Vino) on June 27, contact [email protected]/www.wine-fight.com
www.vueling.com fly from Malaga and Sevilla. Fares start at €44.00.