Valencia Fallas – Something for everybody 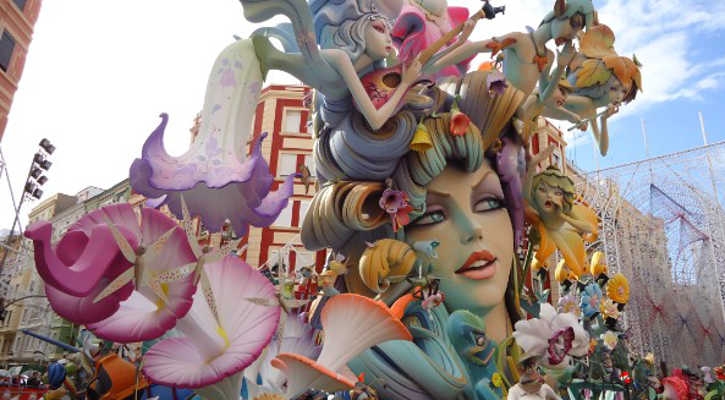 THE hundreds-year-old tradition of burning effigies is familiar to many towns and villages in Spain, but it is the city of Valencia which excels in this celebration.

For a full week the citizens of this city attend banquets, set off fireworks, dress in the elegant Valencian costume, crown beauty queens and fill the streets with noise and colour.

It is a tradition which started with carpenters storing their waste wood for a full year, which was then used for a bonfire to celebrate the Saints day of the most famous carpenter of all time – Joseph – the father of Jesus.

Gradually the idea of pulping the wood and creating paper mache figures of unpopular people, such as politicians, for burning developed. The effigies nowadays are large and impressively artistic and are made from polystyrene.

So how can you enjoy this rather special fiesta?

If you want the time to soak up the atmosphere, seeing all the effigies before they are burnt, and mixing with the locals as they party their way towards the night known as the ‘crema’ – the night of the burning, then a short four-day break using a city hotel is just about right for you. Giving you plenty of time to be part of the party.

If you like the idea of watching processions of flower-carrying people in local costume wending their way towards the cathedral to present the flowers which are then used to dress the virgin in a blaze of colour, then the afternoon and evening of March 17 would see you behind the cathedral surrounded by more flowers than you have ever seen in your life.

On the other hand some people enjoy the excitement of the night of the actual burning. The crowds flow from one effigy to another as each one in turn is set ablaze until the festival culminates at 1am, when, with a loud cheer from the crowd the last and most important effigy, which is so large that it almost reaches the height of the town hall is set ablaze. This is followed by a dazzling fireworks display which fills the night sky before bringing to an end another year at the Valencia Fallas.

David’s Coachtrips offer an option to suit all tastes. If you want the more leisurely option of staying four days in the city, using a comfortable three star city hotel then the dates being offered including transport are four days from March 12 to 15 at only 158€.

If it is the day of flowers to dress the Virgin that appeals to you, then this is on March 17 and the price is only 17€.

For the full blown night of the burning, the date is March 19 and again you can do this for only 17€.

To reserve your place on any of these excursions, simply call David’s Coachtrips on (0034) 966 785 910 or visit our web- site www.coachtripsonline.com.