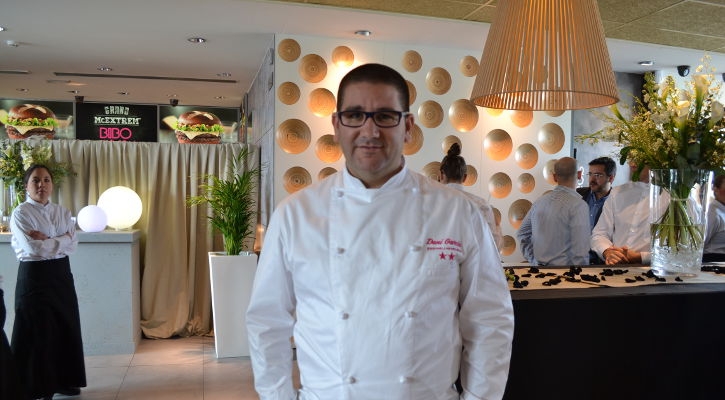 He may be better known for his two Michelin star success at BIBO Restaurant in the swanky Puente Romano Hotel, Marbella, but he wanted the challenge of offering haute cuisine flavours to the McDonald’s chain at very accessible prices.

Today (March 5) McDonald’s Malaga, gave a sneak preview of how Dani created his delicious new treat, the McExtrem, by inviting guests to listen to his speech and see the presentation of the burger itself. He was introduced to the guests by Mar Onrubia, the manager of communication for McDonald’s Spain.

For months, Dani Garcia worked closely with the network of McDonald’s suppliers and experimented in the kitchen with fresh, natural products. To develop the recipe, he added new ingredients and combined unique tastes and textures from his own cooking, which will surprise customers.

The hamburger, which will form part of the Grand McExtremTM group, is made of 100 per cent beef from Extremadura, includes pretzel bread, which Dani decided to use for its different texture, fried onion to play with a crunchy ingredient and a sauce to boost the meat’s flavour, which defines Dani Garcia’s cooking.

The new recipe will become part of the Grand McExtremTM group, which will also reflect the burger chain’s promise to use local suppliers and quality prime material from Spain to create its products.

For a limited period of time, starting on March 10, customers will be able to try out the new creation at McDonald’s restaurants across Spain.

According to Beatriz Faustino, Marketing and Communications Director of McDonald’s Spain, “We are proud to have worked with a two-star Michelin chef for the first time. This collaboration for McDonald’s has allowed us to explore new territories of flavour with the help of an expert in Haute Cuisine to bring them to our customers.

“Dani Garcia represents the values we seek at McDonald’s: he is one of the most talented people on the national gastronomy scene and likes experimenting with modern techniques and flavours.”

Garcia is one of the most important figures on the current gastronomical scene. One of his major abilities is to experiment with modern and risky techniques to offer people truly unique tastes and textures while keeping the traditional flavour of products.

He has an ability to find hidden paths between flavour and technique. The contrasts of his traditional recipes play with textures, combinations of flavours and hot-cold contrasts.

The Repsol guide awarded him three Sun awards and he won best chef of the year from the Gourmetour guide.

He was born in Marbella in 1975 and began studying at La Consula catering school in Malaga at the age of 18. His professional ‘christening’ was in 1996, at the Martin Berasategui restaurant in Guipuzcoa. After training with the Basque chef, he was part of various Malaga restaurants before opening Restaurant Calima in 2005. Dani has become one of the major contemporary names for cookery in Spain.