Will climate change signal the end of Lima’s micro buses? 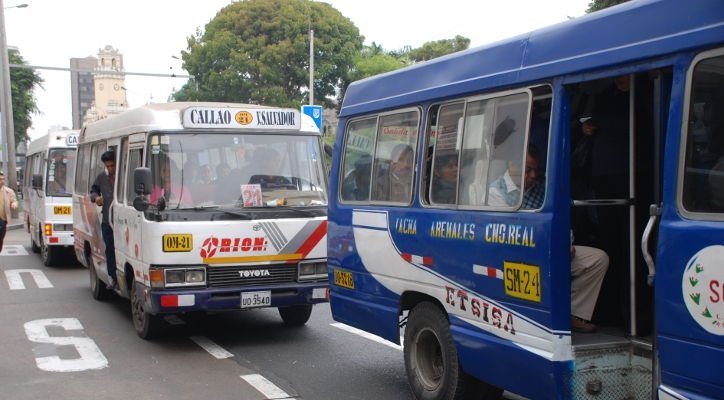 PUBLIC TRANSPORT: Any visitor to Lima will find it hard to fathom out how the system functions, but will not fail to be entertained by it.

WHILE not reaching any major decisions, the recent climate change conference in Lima, Peru, seemed to satisfy the host nation.

Yet the country faces several problems of its own, especially the capital’s public transport system. Any visitor to Lima will find it hard to fathom out how it functions, although they will not fail to be entertained by it. Like any major capital, Lima has a modern metro – which runs on the surface – and an urban bus service. But the majority of Lima’s nine million citizens tend to be transported around the city by thousands of privately owned mini-buses known as ‘micros’ or ‘combis’.

Rather like fashion, these buses come in a range of colours and sizes to suit everyone. They also provide an extremely cheap way of getting around – each trip costs just one new sol, about 30 cents – so long as you know where you are going. But their days may be numbered if the mayor, Susana Villaran, has her way.

A sum of $600 million has been allocated to modernise and extend the public transport system, improve the road network and reduce chronic congestion.

“The thousands of minibuses cause chaos. They pollute, are noisy, unsafe and uncomfortable. Our goal is to go from micro transport to macro transport,” Villaran said.

The effect of these proposals will be to bring to an end a tradition that has been handed down through generations of bus owners. These colourful minibuses tend to be either second- hand Toyotas or Hondas. They compete on Lima’s potholed and cracked roads with larger buses either converted from truck chassis and engines or the distinctive, repainted, redundant school buses, imported from the US. While the larger buses can take more passengers, they are not quite so nimble and quick as the minibuses, but somehow they manage to cohabit without too many incidents.

Despite serving an estimated 500 different routes with destinations clearly marked on the front and sides, the minibuses operate in a seemingly unregulated and uncontrolled fashion racing each other to pick up or discard passengers at bus stops. This is teamwork as each bus comes with both a driver and fare collector. Although there are supposed to be predetermined routes it does not prevent touting for clients with the fare collector hanging out and shouting, almost dragging or pushing passengers onto the buses whenever they stop.

The drivers neither respect each other nor other road users. When a bus reaches a stop first, the driver just blocks following traffic by stopping in the middle of the road.

The micros are crowded and uncomfortable with passengers squeezed in with scant regard for safety. From the sound of the engines and dilapidated appearance they don’t appear to be well maintained either, with fumes emanating from exhausts whenever they idle in traffic, which is most of the time. That said, during my stay in the capital I never saw any of these buses out of service.

It is estimated that there are up to 60,000 of these vehicles in the city with each micro supporting up to three families. With so many buses in circulation nobody has to wait for very long, but the downside is being stuck in traffic so anyone with an urgent appointment would be wiser to seek alternative means of transport.

With up to 200,000 people relying on these buses for their livelihood in a country where unemployment is high, little has been said so far about how many people will be affected by the proposals, in the name of progress, which will end a way of life for many Peruvian families.

However, as transport experts Eduardo Carillo and Edwin Derteano point out: “There is just not enough space for the current number of vehicles on the road. We can’t continue to consider public transport as a centre of employment.”

Financial incentives have also been introduced to encourage the population to get rid of old, unsafe, polluting vehicles and buy newer models.

One major existing route, which the mini-buses cannot use, is the urban express freeway, Paseo de La Republica, one of the city’s major arteries connecting the south-western Pacific coast suburbs to the city centre. From LarcoMar, a modern cliff-top shopping, hotel and restaurant complex on the Pacific coast, it slices through the trendy residential and commercial Miraflores area, popular with foreign residents and visitors, to the downtown area of Lima where the cathedral, palace, museums and pedestrian shopping streets are located.

Special lanes are reserved for modern, fast buses. These routes are precise and reliable with designated stations and each journey only costs 1.50 with tickets which can be topped up from machines in order to gain access to the covered platforms.

The mayor clearly has a mandate to ensure that Lima has a modern, efficient and regulated public transport system with improved roads on which to drive. The city may need cleaner air, but it will be a shame to see the demise of these colourful buses that have been an integral part of the city’s life and culture for so long.