Sterling going from strength to strength 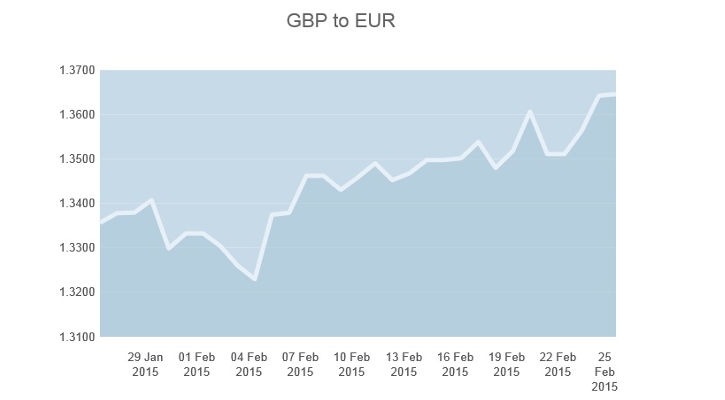 THE great British pound (GBP) continues to push to fresh, multi-year highs against the euro. The feedback from the UK economy has been robust of late and this is supporting the view that interest rate increases could come sooner than currently expected.

The Bank of England (BoE) governor, Mark Carney, cemented this point in his Quarterly Inflation Report and the BoE increased their outlook for growth whilst affirming that they believe the fall in inflation is temporary. In February the pound has now gained around 3% against the euro and the USD and continues to look bullish.

The euro unsurprisingly is under pressure following the uncertainty from Greece and the spectre of Quantitative Easing commencing in March. Although Greece looks like it has managed to obtain a four-month extension, the can has simply been kicked down the road and the uncertainty prevails.

In March, the onset of QE is also expected to weigh on the single currency despite significant euro weakness already factored in. On delivering QE, the ECB denied that a weaker euro was a target; however the impact of the news significantly devalued the euro.

The exceptional policies of central banks across the globe have led to talk of currency wars where a drive for a weaker currency is sought to gain competitiveness.

A weaker euro will help to boost exports and inflation across the Eurozone, as investors and importers outside the Eurozone take advantage of the exchange rate.

The long term impact of QE in the Eurozone is still very uncertain but when you contrast the monetary policy of Europe, who are just embarking on significant easing, to that of the UK and the US who are on the path to monetary tightening, the divergence is very apparent.

Although the pound is sitting pretty at the moment at seven-year highs against the euro, we should not underestimate the potential for volatility surrounding the UK election countdown.

Bill O’Neill, head of the UK investment office at UBS Wealth Management, summed this up very well recently by comparing the election countdown to the Scottish independence vote: “Just as they did with Scotland, the markets are saying fine, fine, fine, but then as the date approaches thy will start to panic a little bit.”

He added: “We think there will be significant volatility in the second quarter of 2015 – it is almost inevitable.”

Therefore the months ahead are likely to be a rocky road for both the pound and the euro. In the short term this favours GBP/EUR but with the election looming euro buyers should not get complacent.