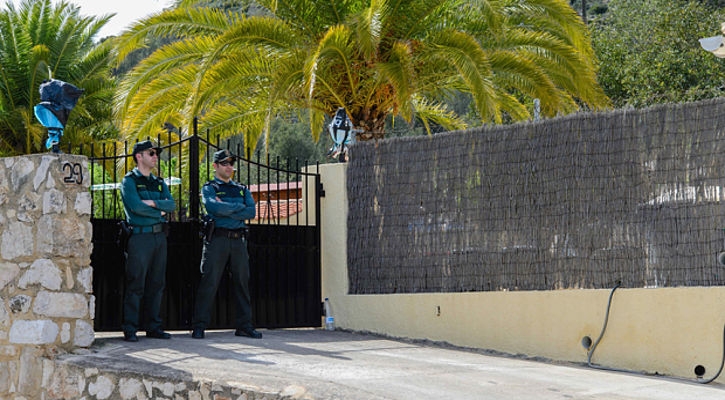 POLICE at the scene

FORMER British Olympic diver and retired engineer Peter David Tarsey and his wife Jean, both 77, were found shot dead, lying in each other’s arms in their Jalon villa on Sunday. The couple had not been seen for several days.

A British friend of the couple’s, a local estate agent who prefers not to be named, had gone to the house when she was unable to contact them by telephone. She said she was still in a state of shock after finding their bodies. “The Tarseys were my closest friends,” she said, “I still can’t really believe it.”

A Guardia Civil spokesman said that initially there had been no obvious signs of a break in. The Tarseys appeared to have been shot with a small calibre weapon.

They were lying on the sofa in their lounge and shell casings were found on the floor. The deaths are being treated as homicide subject to post mortem examinations yet to be carried out.

It is possible that the couple had been dead since Friday 27 March. No gunshots had been heard by neighbours.

A television was missing from the house. The couple had a safe in their home containing valuables which was still locked when officers arrived but the Spanish press reports that the safe showed signs of tampering.

A locksmith examined the safe and confirmed that the combination lock had been drilled several times in an unsuccessful attempt to access the contents. Inside there was no money, only documents.

Police also retrieved the couple’s computer from the swimming pool. And the Tarsey’s little black and white dog, Domino, was found wandering about the house.

The gardener, who was interviewed by police at the scene, said the couple were “charming and normal,” without enemies. A friend said: “Jean did a lot of work for local charities, including one looking after abandoned dogs. She also did a lot of Reiki healing for her friends in the area.”

Mr and Mrs Tarsey had lived in the area for 18 years and had moved to Jalon from Oliva. David Tarsey (he preferred to use his middle name) was a familiar face in the popular Alleluya Bar in the town, dropping in most days. His absence since the end of last week was put down to having some dental work carried out.

Their villa, with its private pool and mountain views, was on the market for €260,000 and had been a target for burglars in the past. The couple were hoping to move to Mallorca to be closer to one of their grown-up sons.

A spokesman for the Foreign and Commonwealth Office said: “We can confirm the death of two British nationals in Alicante, Spain. We stand ready to provide consular assistance.” The family has been informed of the deaths.