Who rebuilds the Berlin wall? 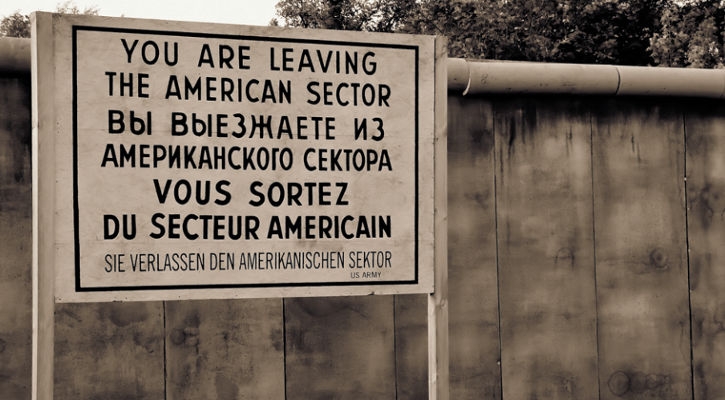 WESTERN media bullhorns Muslim intolerance, yet we too pull up the drawbridge on free debate.

In the embassy of a friendly nation a journalist of international reputation seeks sanctuary. His offence, for no one can be under any illusions, is his bringing to light illegalities practised by government.

Whistleblower Edward Snowden, who prefers being stateless to voiceless, seeks sanctuary in Russia. Chelsea Manning, not so quick to make good his escape, faces a 35-year jail sentence for disclosing information that exposed his government to inter-national scrutiny.

In Germany, journalists are verboten to debate Udo Ulfkotte. The former editor of Frankfurter Allgemeine Zeitung exposed the level of CIA corruption under-mining the integrity of Western journalism and the West’s political elite.

John Pilger, one of Britain’s most revered investigative journalists, has been sidelined to ‘alternative media.’ Like Paul Craig Roberts, he is one of many Western journalists who ‘disappear.’ Jeremy Bowen, a BBC news presenter, was obliged to take a sabbatical after criticising Israel. Ex-pect him to be a yesterday person any time soon.

In order to give a semblance of free expression, pot shots are allowed but buried in the detail. Columnist Peter Hitchens: “Is there any point in public debate in a society where hardly anyone has been taught how to think, while millions have been taught what to think.”

Facebook defends publication of ghastly images of human and animal depravity. It gives a false impression that anything goes but ‘revisionist’ comment is still taboo as the noose tightens further.

There is now an insidious selective intolerance of opinion. Debate is not keenly contested with facts or figures but with slur, innuendo, character assassination, boycott and blackmail. Dissenters are dismissed as ‘trolls.’

If this fails, then censorship completes the gagging process. Western beheadings are less messy.

I grew up detesting a system that, in order to survive, built the Berlin Wall and erected frontier barriers stretching from the Baltic to the Black Sea. Then we wondered at the Soviet people’s apathetic acceptance for their con-finement and denial of access to the outside world.

When, 26-years ago these ghastly inhuman barriers were torn down, I was mocked when I prophesied that the West was merely changing places with the USSR.

Now, explain to me your apathetic acceptance, even support for €100 million of EU taxpayer’s money being spent on a Wall of Shame currently being built to stop fellow Europeans fleeing to modern Russia.

Described by Ukrainian Prime Minister Yatsenyuk as ‘constructed after the Berlin model,’ this 2,000km frontier is guarded, mined, fenced and electrified.

Ukrainan Army squads, trained by the US today raid campuses to capture conscripts.

Perhaps you can now better understand the Soviet people’s acceptance and support for their confinement and denial of access to the outside world. Welcome to the future.