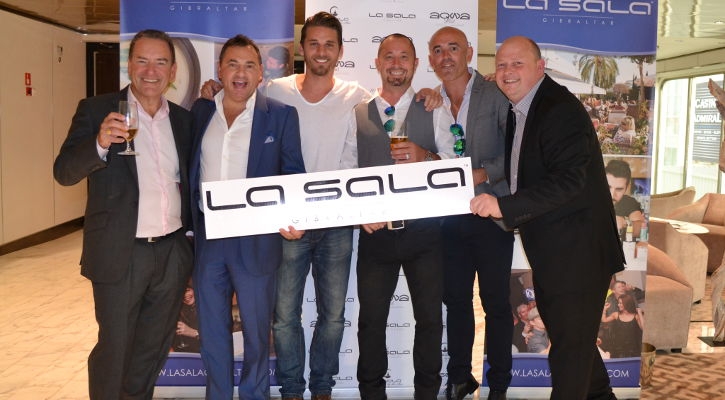 The event was to mark the announcement that La Sala Group is joining forces with Sunborn to open their first Gibraltar venue, a restaurant onboard the luxury, floating hotel.

Wayne spoke about the brand values that both Sunborn and La Sala find essential in order to succeed in business. He said that Gibraltar was the ultimate destination to come to and with two strong brands such as these, they had never wavered in their belief. He described the new concept as built on passion, and the foundations were so solid that it took only hours to decide on the business.

Sunborn Hotels CEO Hans Niemi told of his vision to bring “a high definition restaurant” and class performances to the yacht, and thanked everyone for their patience.

Sky Sports Presenter Jeff Stelling gave a speech echoing the words of the businessmen, and said how proud he was to be a part of the team. He said that this was the correct formula that would not only create more jobs but also bring good business to the surrounding area, and benefiting everyone.

Blackburn Rovers legend David Bentley was eager to take to the stage to say how he had loved La Sala from his first ever visit to Puerto Banus and said even if he were not a shareholder in the business, it would still be his number one venue to relax and feel comfortable.

Wayne Elliot once more wanted to thank the strong team behind the venture – James Hastwell, the regional manager, executive chef James Adams, and Fabri Anton, regional training manager, who are specialists in their fields and offer the quality of service required in this fantastic venture.

The marketing team was thanked for playing a key part in steering the ship in the right direction – Lucy Russo, who studied marketing in Washington and has now brought her skills to Gibraltar, and Tene Sommer, in charge of publicity operations at La Sala Marbella.

The group plans to open La Sala Sunborn in mid-May and a possible opening party is pencilled in for first week in June.

After the speeches the champagne flowed while guests were eager to ask the team and celebrities many questions while being entertained by the well-known group, Masquerade.

The Euro Weekly News was present to take a tour round this extremely elegant venue and grab some photos. All of the team at the EWN wish Sunborn and La Sala the very best in their new venture.