Marbella tragedy: Brit hero’s desperate efforts to save boy are in vain 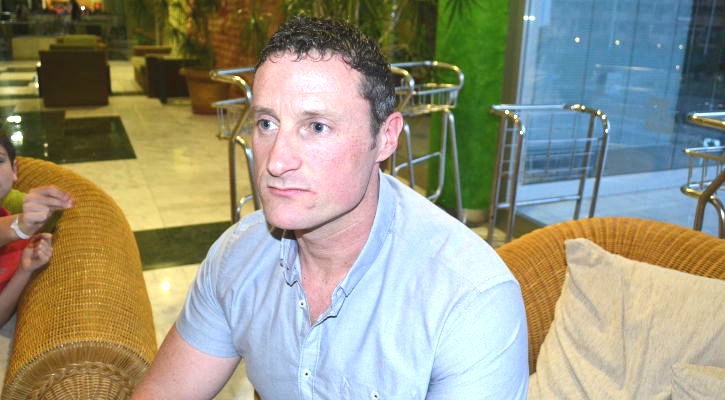 Taking in the warm Marbella sun while relaxing on the beach with your family sounds like an idyllic way to end your holiday. Unfortunately for Andrew Broughton, his family holiday was about to turn into a tragic day he would never forget.

The modest engineer from Portsmouth and his wife Michelle were passing the last days of their week’s holiday on Playa Venus on Monday with their two young sons, when a group of around 15 people in their late teens who were just metres away from them started shouting and screaming out to sea. They quickly realised that something was wrong out amid the waves.

“It was obvious straight away that the group were a school for the hard of hearing or something,” Michelle said. “My son has autism and I recognised the gestures they were making with their hands and bodies. They were screaming for help!”

Without a second thought Andrew launched himself into the sea, grabbing a life buoy from a bystander as he went. “The only thing I could see as I ran into the waves was a guy on a surfboard trying to help two people who were about 100 metres out, and obviously in serious trouble.

“It wasn’t until I got up close to him that I spotted another swimmer face down a little further out. A decision had to be made, do I stay and help the surfer holding the two boys on the board, or do I try and save the third?”

Andrew’s voice trembled and his eyes puffed up as he explained to me that the way he saw it, the two on the board had the surfer to help them, while the other had no one, “so I carried on to the lone boy.”

Andrew is big guy, in more ways than one. Apart from having a big heart, always willing to help someone out, this gentle giant in his early 30s is an ex-rugby player who lives in the gym, says Michelle, and is at the peak of physical fitness. What with first aid courses under his belt and being a very strong swimmer, there couldn’t be anybody better suited to rescuing a drowning boy.

He continued, “My one thought was to get to the boy, but the current was so strong it was taking everything I had just to reach him.”

When he finally did, the boy was face down in the water. He feared the worst as he lifted his head back and pulled his limp body through the life buoy. He was unconscious and frothing at the mouth.

“I wiped his face and gave him mouth to mouth before realising that if I didn’t get him back to shore quickly, we could both be in trouble. I was so tired, exhausted, fighting the current took more out of me than I thought.”

Michelle, watching from the shoreline, was becoming increasingly worried. She could see that the cross current had taken everyone in the water a long way off of her position. To compound her, and everyone else on the beach’s state of panic, “No emergency services had turned up. The only people doing anything were the tourists, those guys were risking their lives and no one was there to help them,” she said.

“There was no life guard, no rescue boat, even when the police did turn up they didn’t do anything, they all just stood around on the shoreline looking out to sea and dodging the surf line in case their shoes got wet.”