Arsenal and super Caley were fantastic but Villa were atrocious! 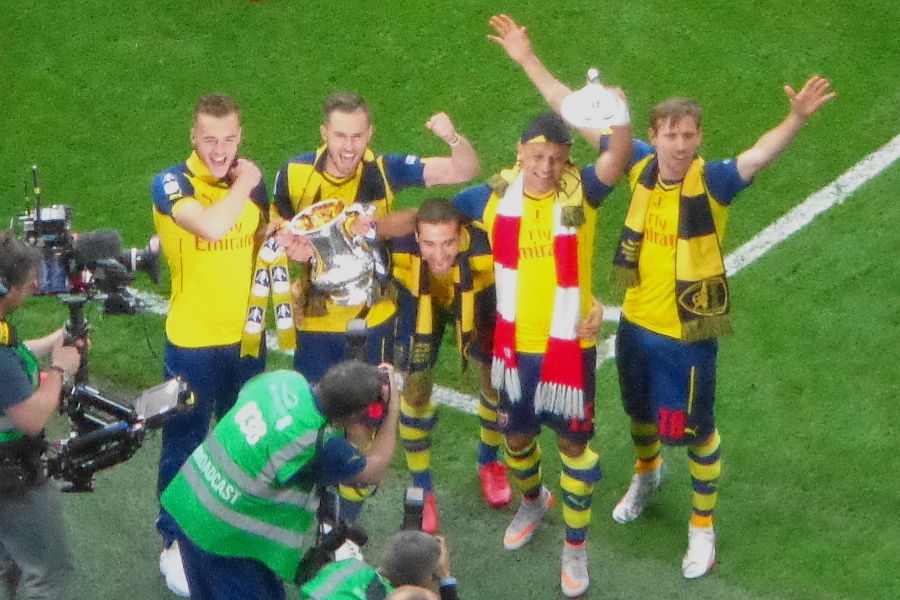 GUNNERS GLORY – I will start by congratulating Arsenal, who last Saturday won the FA Cup for a record 12th time – and a sixth victory for manager Arsene Wenger.

The Gunners outplayed a poor and disappointing Aston Villa side to register an overwhelming 4-0 victory, with Alexis Sanchez scoring one of the great Wembley goals of all time. Indeed, for the first time ever in a final, the four goals were netted by players from different countries: England (Walcott), Sanchez (Chile), Mertesacker (Germany) and Giroud (France).

Villa (who had five players yellow-carded) never had a single effort at goal – and as far as I can trace, this has never happened before whereby a team has not tested the opposition ‘keeper. Arsenal dominated the 134th final from start to finish, and thankfully 39-year-old Shay Given in Villa’s goal made half-a-dozen saves to keep the score down. It could have been 10-nil otherwise! Prince William should have played for Villa – he turned up!
Arsenal’s 4-0 romp equalled Manchester United’s wins over Brighton in 1983 and Chelsea in 1994, and is the joint third highest score in a final – Blackburn thrashed The Wednesday in 1890 and Bury clattered Derby 6-0 in 1903.
* Arsenal beat Villa 5-0 (h) and 3-0 (a) in PL games in 2014-15 (12-0 on aggregate).

SOCCER ROUND-UP
• Last weekend, there were also cup final wins for Inverness Caledonian Thistle, 2-1 over Falkirk in Scotland (this was Caley’s first-ever trophy in their 21-year history); for Barcelona, 3-1 over Athletic Bilbao in the Copa Del Rey before 99,354 fans at the Nou Camp (Lionel Messi scored twice); for Wolfsburg, 3-1 v. Borussia Dortmund in Germany and for Motherwell who thumped Rangers 6-1 on aggregate (3-1 and 3-0) in the play-off final to remain in the SPL.
• Watch out you Blues and Reds! FC United of Manchester are just two divisions away from entering the Football League. Last Friday, a record 4,232 crowd saw them lose 1-0 to Benfica ‘B’ at the official opening of their new Broadhurst Park ground.

COMING UP
This weekend we have the Canadian F1 Grand Prix from Montreal where Lewis Hamilton will be aiming to bounce back after the disappointment of Monaco.
In football, treble-chasing Barcelona play Juventus in the Champions League final on Saturday evening.
In friendly internationals, Scotland play Qatar on Friday and the Republic of Ireland meet England on Sunday.
The women’s FIFA World Cup starts in Canada on Saturday.
Horse racing enthusiasts will gamble on the Oaks (Friday) and the Derby (Saturday). The finals at the French Open tennis championships at Roland Garros take place at the weekend.
And England plays New Zealand in a ODI at Edgbaston next Tuesday.

COMMENT
What a joke! Sepp Blatter is still FIFA President (he could hold office until he dies). However, following the arrest of seven members of football’s governing body in Zurich by the FBI for alleged bribery, racketeering and money-laundering, he denies any wrong-doing. What an idiot! Like the Chief Constable, the MI5 boss, the Prime Minister, even the school’s head, you are responsible for those working under you! Even the Duke of Cambridge is getting involved now. There’s a lot more to come regarding this incident, mark my words. FIFA is in chaos and not for the first time either.
DID YOU KNOW? Ryan Giggs’s brilliant individual and winning goal for Manchester United in the 1999 FA Cup semi-final against Arsenal has been voted the best ‘Match of the Day’ goal of the last 50 years.
QUIZ – I have a BRL charity quiz at The Beachcomber, Mojacar Playa, Friday evening (June 5), 8.30pm. And congratulations to Pete and his team who won the football quiz at the Loft last Saturday.