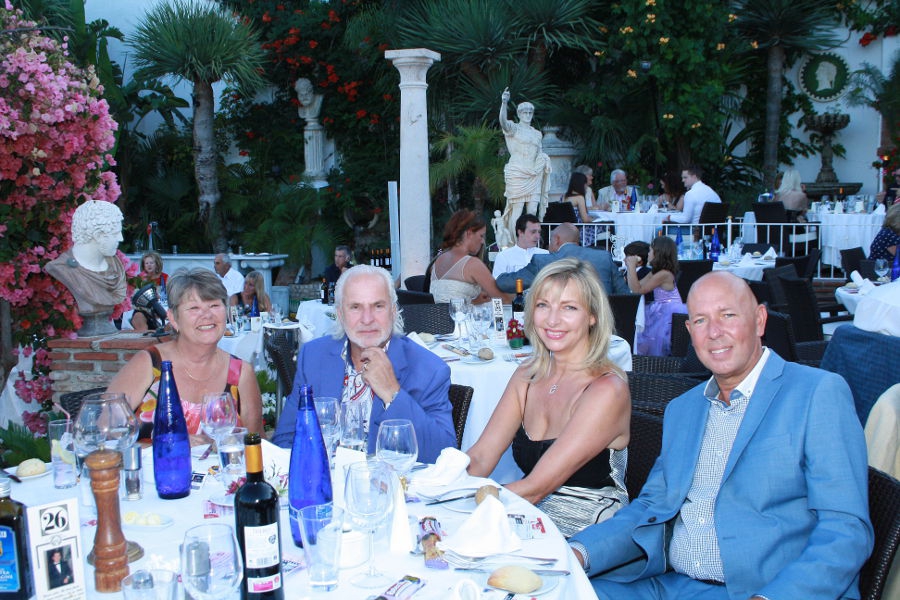 THIS Sunday June 7 Villa Tiberio will host the most spectacular, star-studded event to raise money for Children with Cancer UK. Sandro Morelli, the owner of the elegant Marbella venue, has supported the Children with Cancer UK charity for many years, and this will be the eighth year that Villa Tiberio has been the beautiful backdrop for the event.

Italian-born Sandro came to Marbella from London, bringing with him a wealth of experience from working at the Ritz and Cavendish Hotels, so he is undoubtedly a number one choice for knowing how to attract a following.
Villa Tiberio is his life and soul, and the walls of the restaurant are decorated with an array of celebrities who have enjoyed Sandro’s hospitality over the years. Sandro cares about the less fortunate, as he says: “The world has forgotten what is important. How can we spend millions on warheads when there are millions of children dying around the world?”

Children with Cancer UK was inaugurated in 1988 by Diana, Princess of Wales, in memory of Jean and Paul O’Gorman and this charity has touched the hearts of many further afield than just the UK.
To date, this event at Villa Tiberio has raised almost £250,000 for Children with Cancer UK. This is a truly amazing achievement and Children with Cancer UK are hugely grateful for Sandro’s continued support.
The MC for the evening will be Simon Greenall, who is perhaps best known for voicing Alexander Orlov and Sergei in the hugely popular Compare a the Market Meerkat ads. He played Michael the Geordie in I’m Alan Partridge with Steve Coogan, both in the TV series and also the film. Simon is a comedy actor, voice artist, writer and producer, this summer he will be playing Sid James in the Missing Hancocks at the Edinburgh Festival.
The stars of the show will include performances by Sarah Lark, who was a finalist on ‘I’d Do Anything’ for BBC1. Sarah has been performing since the age of 12 and has performed in musicals including Annie and the Andrew Lloyd Webber musical Whistle Down the Wind, and she has appeared in an array of television productions.
Claire Huckle, who starred in Without Motive, A Respectable Trade and Casualty, will be on the star-studded stage. She not only has a spectacular showcase of television productions behind her but she is an excellent performer and highly accredited in her field.
Cassie Compton, the X Factor finalist who is now an acclaimed actress following her roles in Love in a Cold Climate and Call the Midwife, will also be taking part, and Amy Lennox, who starred as Elle in the sell-out West End musical Legally Blonde, will be in good voice for the event, so this show is a must see.
Other well-known artists who reside in Spain will be performing some classic songs, including the popular Helena Paul. She has worked in the music business all her adult life and has sung and recorded alongside many of the industry’s stars including Wet Wet Wet, Peter Gabriel, Phil Collins, Jocelyn Brown and Kym Mazelle. Mel Williams, a legend who is considered a pioneer of entertainment on the Costa del Sol, will also be performing at the event, as will Zoe Louise. Zoe sings at top venues around Marbella and after recently signing with a management company in the UK, Zoë will be travelling back and forth to record her first EP and perform at top venues in London.
Sandro, once again has made this Summer Ball possible by welcoming celebrities and kind hearts together to enjoy an evening under the stars with the stars at Villa Tiberio, a perfect combination.
The evening will begin at 7.30pm with reception drinks followed by a three-course dinner al fresco, then dancing with special guests from the West End stage, and an auction with some amazing prizes.
Visit www.villatiberio.com For further information, please contact the events team on 020 7404 0808 or email: [email protected]