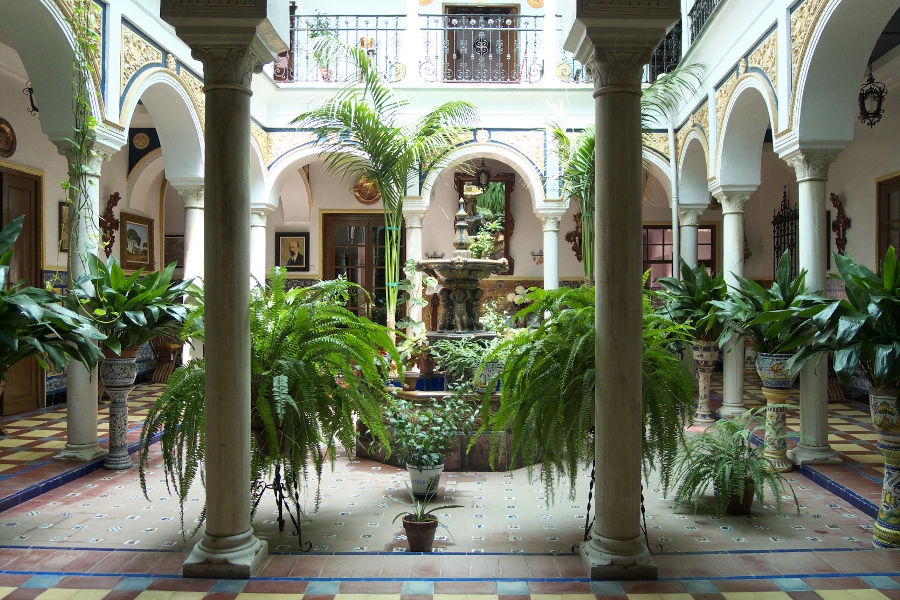 FULL OF LIGHT: A courtyard at a private home in Moguer, Andalucia.

INTERNAL courtyards are a typical feature of Spanish architecture, with the Roman and North African-influenced style of the ‘Patio Andaluz’ one of the most evocative images of life in the south of Spain.
Andalucia loves its flower-draped and decoratively tiled courtyards so much that they are celebrated in many towns and cities with special fiestas, like the Festival de Patios Cordobeses in Cordoba, which takes place in the middle of May. Participants open the doors to their patios to invite the public in, and a coveted title is awarded to the most beautiful.
In recent years, the contest in Cordoba has been split into two categories, for patios in historic buildings and more modern creations, reflecting the continuing popularity of the architectural style.
And it’s a style that’s spreading, with architects worldwide picking up on the benefits of an interior patio. “Adding valuable outside space and light to urban homes, internal courtyards are increasingly being included in new developments and also being added to older homes,” says the Daily Telegraph’s property section, looking at current trends in home construction.
A couple of years ago, scientists at the University of Sevilla established what Spanish families had known all along – that temperatures in a courtyard are cooler than out on the street.
There’s some complex thermodynamics behind that common sense assertion, says architect Juan Manuel Rojas: “These spaces create a mixture of phenomena: stratification (hot air rises and cold air falls); convection (the walls heated throughout the day project air upwards); and flow patterns (whirlwind formation depending on the geometry of the space).”
But learning how it works is helping developers to build homes with smaller carbon footprints, making efficient use of the courtyard’s cooling and heating capabilities.
The social and psychological benefits of courtyards are also being considered by architects. They provide private, quiet outside space for houses in densely populated cities, or for small communities of homes a courtyard can be a social place for shared activities.
But above all, such patios are beautiful spaces, which put daylight, greenery and colour at the heart of the home.