Never Mind the Buzzcocks cancelled after 18 years on BBC Two 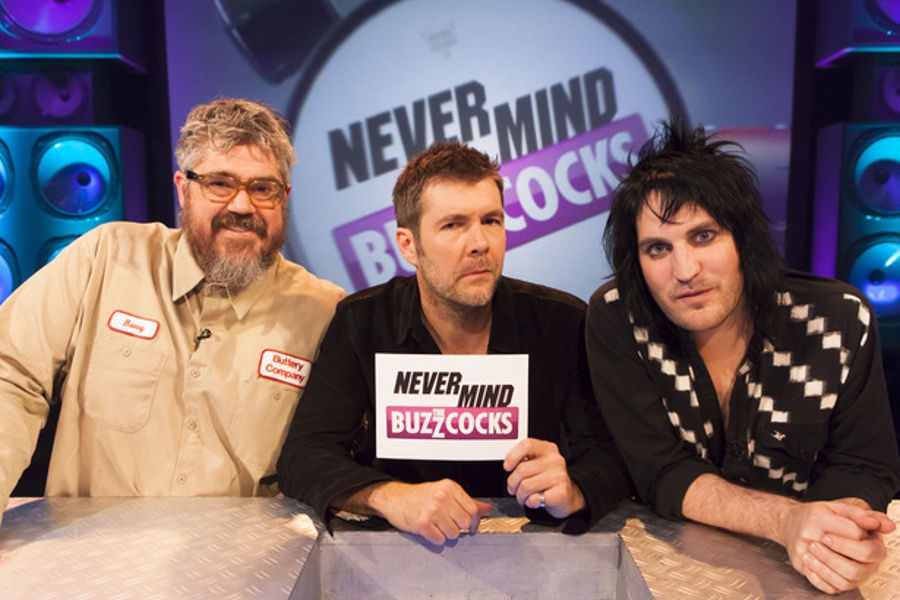 END OF THE SHOW: For Phill, Rhod and Noel.

NEVER Mind the Buzzcocks has been cancelled. Channel controller Kim Shillinglaw and BBC entertainment controller Mark Linsey have confirmed the end of the show, Broadcast reports.
A BBC spokeswoman said: “After 28 series we’ve decided not to bring Never Mind the Buzzcocks back to the BBC. This will create space for new entertainment formats in the future.
“We’d like to thank the team at Talkback, Rhod Gilbert, all the brilliant hosts over the years and of course Noel and Phill for the years of enjoyment they’ve given BBC Two viewers.”
The pop music panel quiz first aired in November 1996, and has run for over 260 episodes over 28 series. It was hosted by Mark Lamarr for its first 17 series.
Guest presenters took over for the 18th run, before Simon Amstell took over hosting duties for four series. The show returned to having guest hosts for series 23 to 27 and Rhod Gilbert took the role permanently for series 28.
Phill Jupitus has been a team captain since the start of the show, and was joined by Sean Hughes for the first 10 series. Bill Bailey was a captain for series 11 to 21. After joining for the last three episodes of series 21 when Bailey left, Noel Fielding became a permanent captain in series 23.
Louis Walsh has revealed one of his biggest X Factor bugbears: there’s too much singing in it.
The judge told BBC Radio 1 that the ITV show needs a big shake-up to keep it interesting, perhaps with less of the singing aspect. “Singing shows are not what they used to be – they have too much singing in them,” he said.
When asked who he thought could replace him on the panel if he leaves, Walsh said that Robbie Williams would be his first choice, followed by Jon Bon Jovi.
Giving advice to rumoured judge Nick Grimshaw, he said: “Nick, just be yourself. Don’t use any of my catchphrases. And do everything [Simon] Cowell tells you. And hope you don’t get the groups because if you do you’ll be in trouble.”
Walsh has served on the panel for 11 years, although he has been heavily rumoured to be leaving ahead of the new series. Olly Murs and Caroline Flack will host a new-look series, following the departure of Dermot O’Leary after eight years.

If you would like me to answer any questions you may have on satellite TV or to expand on anything I have written about please call me on 678 332 815 or email [email protected] I look forward to your comments and questions. Don’t forget to listen to my radio show every weekday from 10am on Spectrum 96.1 & 106.8FM, now covering almost 3000sq kms of Costa Almeria and Calida or listen online at costaalmeria.spectrumfm.net for the latest news and views from the world of satellite television.