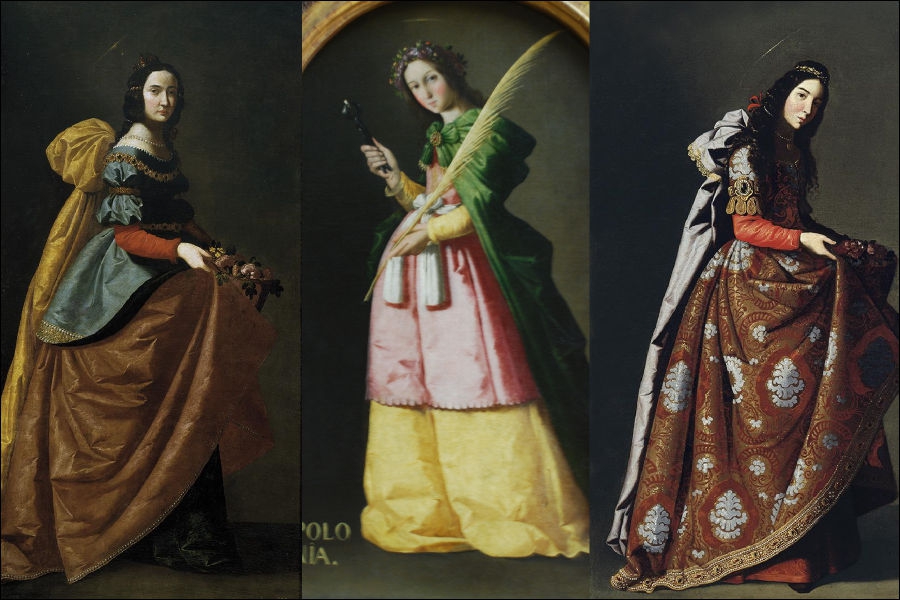 FOR the first time in more than 25 years the Spanish artist Francisco Zurbaran is the subject of a major exhibition at the Thyssen-Bornemisza museum in Madrid, organised in conjunction with the Museum Kunstpalast in Dusseldorf.
One of the most important figures of the golden age of Spanish art, Francisco Zurbaran was born in Fuente de Cantos, Extremadura, on November 7, 1598. He showed an aptitude for art at an early age and in 1614, when he was only 16, his father, a merchant, sent him to Sevilla to become apprentice to the artist, Pedro Diaz de Villanueva.
His first works, commissioned by religious orders, and for which he is best known, depicted monks, priests, nuns and virgin saints in monasteries and churches wearing their traditional austere robes.
He became known as the Spanish Caravaggio with his brilliant use of the techniques of chiaroscuro contrasting the white robes of monks against dark backgrounds.
His works appeared in the Sevilla Cathedral and the Carthusian monastery of Santa Maria de las Cuevas. In1626 he signed a contract to provide paintings for the Dominican Priory of San Pablo et Real, by which time he had moved permanently to Sevilla. The dramatic, sombre interpretation of the Christ crucified on the cross, presented in 1627, established his reputation.
During his years in Sevilla, working with his apprentices, he began a series of portraits depicting martyred, virgin saints which was a subject appreciated at the time. These paintings were radically different to all the other religious works Zurbaran produced.
Instead of portraits of priests or nuns in religious attire, the artist embarked on a totally original approach depicting his saints as elegant young women wearing lavish, colourful, rich clothes.
The paintings of the saints were undertaken over a period lasting 20 years between 1630 and 1650 and most were probably commissioned. They were chosen from the virgin saints who had become martyrs over a period spanning more than 1000 years between the second and 15th centuries. The only exceptions were Santa Matilda and Santa Isabel of Portugal who were from noble families. Their royal marriages had made them Queens and they had given birth to children. That is why they are depicted with crowns.
Today Zurbaran’s Saints are in public and private collections around the world and over the past 50 years their serene appearance in such a variety of costumes and colours has had a profound influence on many modern couturiers including Balenciaga, who once used the dress of Santa Casilda as a model for his fashions.
In 1634 he was invited to become an official artist to the King, Philip IV, but his style was less appreciated than Murillo, a favourite of the Spanish baroque period and of course he had to compete with Velazquez, who was also from Sevilla.
Zurbaran’s painting of the Defence of Cadiz against the English is an example of the work he undertook for the Court illustrating military conflicts. In April 1639 he was commissioned to paint several portraits for the sacristy in the monastery of Guadalupe in Extremadura.
These are possibly his finest legacy, comprising 10 large paintings for the sacristy with nine smaller works around the alterpiece. They all depict prominent members of the Hieronymite order with no less than eight representations of Saint Jerome.
His personal life was not short of traumas. It was in Sevilla in 1617 that he met and married Maria Paez, at 28, nine years his senior, but she died after only six years of marriage. In 1625 he met and married a wealthy widow, Beatriz de Morales. The marriage lasted until her death in May 1639 and it was five years before he married again in 1644 to another wealthy widow, Leonor de Torder.
Zurbaran had several children from his marriages. In 1658, out of favour in Sevilla, he moved to Madrid with his family, where he was able to renew contact with his contemporary, Diego Velazquez. Despite his talent and success achieved during his lifetime, his popularity declined and he ended his life in poverty, dying in relative obscurity.
While the majority of his religious works can be seen in the Guadalupe Monastery in Spain’s Extremadura region, 13 of his paintings found their way to Auckland Castle in Durham. They were acquired in 1756 by the Bishop, Richard Trevor for his residence.
The paintings, depicting Jacob and his sons, adorn the walls of the castle’s dining room, built specifically to house them, where they have hung for 250 years.
They remained in the possession of the Church of England until in 2011 the Church sold the castle and works to a philanthropist, Jonathan Ruffer, who plans to reopen the castle allowing the paintings to be seen by the public.