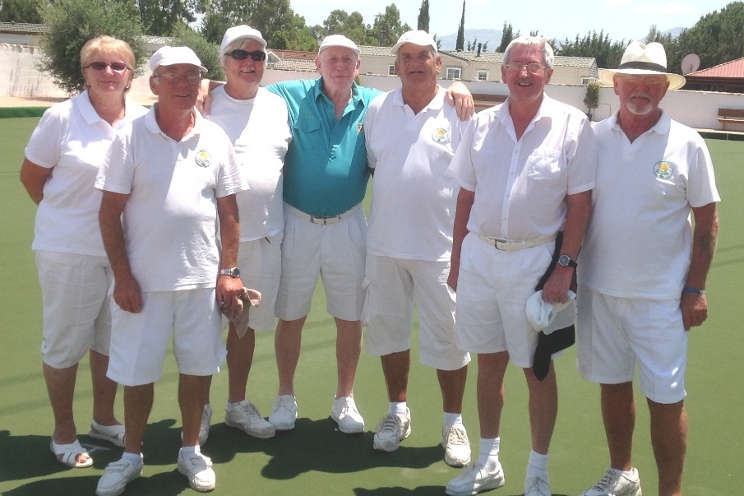 ELEVEN teams were entered in the Saydo Single Sex and Mixed Open Triples – their first Open competition.
The final was between two teams from La Posada, both of which had had two hard fought semi-finals earlier in the day prior to reaching the final.
The teams were: Allen Gateshill, Maureen Fewings and Kevin Briody versus Stuart Robertson, Lol Moon and Bill Hill who were to take the title.
It was nip and tuck all the way and after 12 ends there was only one point in it. The standard of bowling produced by both teams was mesmerising.
Allen’s team had a three shot lead going into the 18th and final end, but all was not lost for Lol as he had managed a two shot advantage after delivery of his three woods, two behind and one in front of the jack but Maureen was not to be beaten, her last delivery took shot, just rolling past Lol’s front wood.
Bill’s first delivery went past the jack and his second pulled up just short of Maureen’s shot wood. They were still one down. Kevin’s first two deliveries were well placed blockers and along with Maureen’s other woods were now forming a formidable defensive line in front of the jack. Bill’s final delivery managed to thread its way around and between the defensive woods and trickle the jack back towards Lol’s two backwoods, they now held three.
Kevin responded with a superb draw shot, but it just nudged Bill’s wood and it trickled away past Lol’s back woods to be fourth shot.
Next up were the skips with Stuart’s first wood a superb draw shot resting to the side and jack high, his team now held four shots.
Allen replied with a well weighted forehand delivery, hoping to either draw shot or promote Maureen’s wood which was now some 18 inches in front of the jack, but as it was edging past Bill’s front wood it seemed to wobble fractionally which caused it to catch Bill’s wood and was turned away.
Stuart now held five shots and Allen’s next delivery, whilst it was only just past jack high was a little wide and did not reduce the count against him. Bill asked Stuart to put in a blocking shot; it was looking good all the way, but it was some 12 inches too long and ended up in the count but to the right of the jack, thus presenting Allen’s last wood with a slightly larger target of woods to draw onto.
Allen’s last delivery was a forehand draw shot, which unfortunately caught a slight deflection rather than a solid hit and was nudged away.