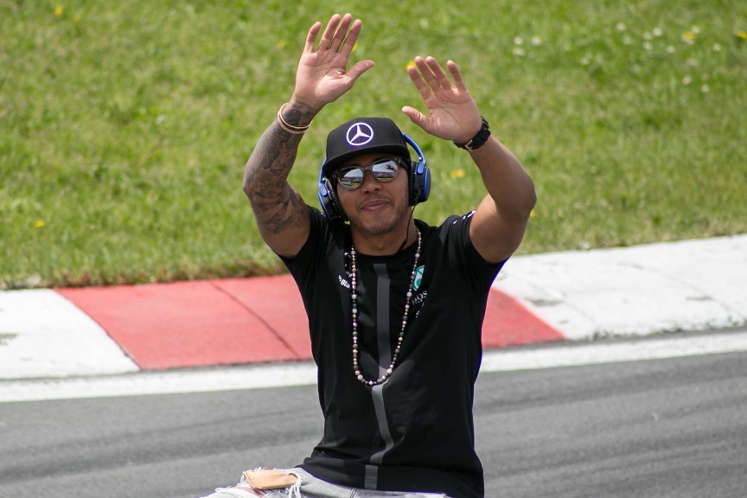 • 256 men and women will compete in the singles events with another 112 participating in the doubles and mixed doubles.
• 54,250 yellow tennis balls will be used during the two-week event.
• 6,000 staff (including 250 ball boys/girls and 1,800 caterers) will be employed daily.
• The average daily attendance at Wimbledon (all courts) will be 38,300 giving an aggregate total for the fortnight of 536,200.
• The respective winners of the men’s and women’s singles titles will each receive £1.88 million (€2.64 million) and the total prize money overall is £26.5 million (€37.32 million).
• And I know you all interested in this – 28,000 kilogrammes of strawberries and cream will be served up and consumed.

FORMULA ONE – This weekend the cars, crews and drivers will compete in the British Grand Prix at Silverstone. Lewis Hamilton, who holds a ten point-lead over his Mercedes team-mate Nico Rosberg in the drivers’ championship, will be as determined as ever to win on home soil!
ATHLETICS – Many top athletes will participate in the Diamond League meeting in Paris on Saturday before moving to Lausanne in Switzerland next Thursday, with meetings in Monaco (July 17), London (July 24-25) and Stockholm (July 30) to follow. And you can expect Mo Farah (despite the doping inquest) to be competing at one or more of these venues!
CYCLING – The Tour de France starts on Saturday and runs through to the 26th of the month. GB’s Chris Froome is among the fancied riders.
WIMBLEDON – Yellow balls are already flying around and with this being a ‘European’ newspaper, hopefully Andy Murray, Novak Djokovic, Rafael Nadal and Roger Federer – all previous winners of the men’s title – will be challenging for honours again. In fact, Murray COULD face Federer in the semi-finals and Djokovic in the final… if they all keep on winning. As for the woman, I ‘fancy’ Simona Halep and Ana Ivanovic while Serena Williams WILL hold all four Grand Slam titles simultaneously if she wins!
CRICKET – The T20 Blast competition is heating up and with the group games almost complete, Birmingham Bears (Warwickshire really), Surrey, Worcestershire and Durham are all set to qualify for the next stage. The big game on Thursday night (July 2) is the Roses Battle: Yorkshire v Lancashire.
Oxford beat Cambridge by 43 runs in the annual varsity cricket match at Lords. And don’t forget, the first England-Australia Ashes Test starts in Cardiff in six days’ time. And world number one batsman, Aussie skipper Steve Smith, is bang in form.
MOTOGP – Last Saturday, Italy’s Valentino Rossi (Yamaha) beat Spain’s Marc Marquez (Honda) by less than a second to win the Dutch Grand Prix in Assen. Jorge Lorenzo (Yamaha) was third. The 1-2-3-4 in the riders’ championship after eight races is Rossi (163 points), Lorenzo (153), Andrea Iannone (Ducati, 107) and Marquez (89). Next up: Germany, 12 July.
FOOTBALL – The final of Copa America takes place on Saturday in Santiago, and will feature the winners of the two semi-finals involving Argentina v Paraguay (who ousted Brazil) and hosts Chile v Peru.
On Sunday, Vancouver stages the women’s World Cup final, which could feature England. They have reached the semi-finals for the first time ever after beating hosts Canada 2-1 before 60,000 fans and play holders Japan on Wednesday night (July 1) for a place in the final.
Germany, who scraped into the semis via a penalty shoot-out victory over France, meet the USA in the other last four game on Tuesday (June 30).
Also on Tuesday, the European U21 Championship final between Portugal and Sweden takes place in the Czech Republic. Disappointing England lost their three group games, scoring just one goal.
And did you know the 2015-16 season starts this week – oh yes it does! There are 32 first round qualifying games in the Europa League on Thursday, among them: Alashkert v St Johnstone, Shkendija v Aberdeen and West Ham v Lusityanos.
ROUND-UP – This weekend, the World Superbike Championships start in Russia and the Modern Pentathlon World Championships and Beach Volleyball World Championships conclude in Berlin and the Netherlands… On Saturday punters (and bookies) will attend Sandown Park to watch the Eclipse Stakes, while last weekend the 150th Irish Derby was won by Jack Hobbs, ridden by William Buick… Tai Woffinden (Wolves) is the British speedway champion for the third time… the WSR-run BMW team claimed a hat-trick of BTCC wins at Croft last Sunday through Andy Priaulx, Sam Tordoff and Rob Collard… and Leeds meet St Helens in Rugby’s League Cup semi-final.

R.I.P…. Geoff Duke, who spent 10 years at the highest level of motorcycle racing, winning six World Championships and six Isle of Man TT races during the 1950s, has died at the age of 92.