Talking about Kate and Zara 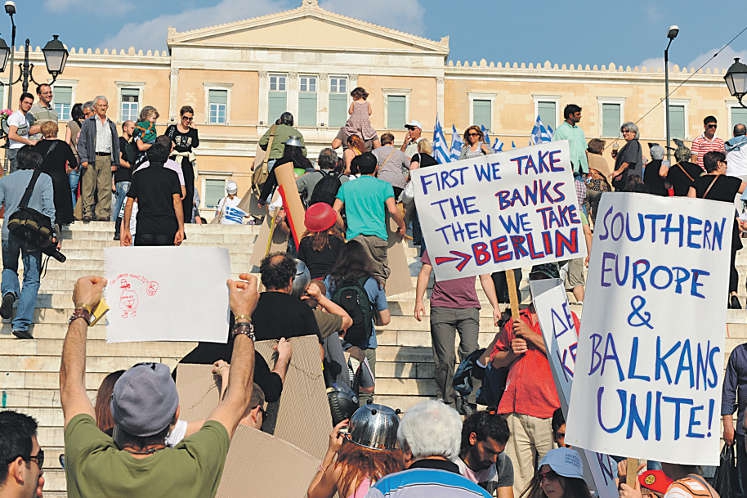 QUIET: No serious debate on collapse of Greece.

OCCASIONALLY, I look back on my history of columns. I wonder how many of these stories would see printer’s ink in other mainstream media.
One has to go outside Europe, delve deeply on the internet, to discover that in the last two years, 74 NASA scientists died under suspicious circumstances.
Why are we denied real news? Is it because we prefer the comfort of a dumbed down version of world events? Is it, as CBS anchorman, Walter Cronkite said: “Our task is not to tell the truth; we are opinion moulders.”
I glance at a UK national newspaper. Headlines, the queen’s granddaughter may be pregnant. Kate Hudson shows off her ‘phenomenal body.’ Former Labour spin doctor helps ‘pariah Putin’ polish his image.
Bolshevik revolutionary, Lenin, described football as the opium of the masses. Today, the tranquiliser is news of student mischief abroad; the ramblings of two unemployed scruffy motor heads, and aliens know how to find us.
Best not mention Britain’s debt interest has hit £1 billion a week. NATO expansion on fanciful pretext brings all-out war closer than the Cuban missile crisis. Let us not talk about Iceland arresting bankers for fraud, its economy recovering.
There is no serious debate on the collapse of Greece or an EU in crisis over a non- European invasion. Ukraine: Only the EU could destroy the economy of Europe’s biggest country in just 12 months. This EU – US mess, according to the Austrian Institute of Economic Research, will lose 1.9 million jobs and €80 billion. Hard news is that Spain, and indeed the EU, faces meltdown in public support.
A large anti-EU faction of lawmakers is now at the heart of Brussels. Here in Spain, the electoral success of antiausterity Podemos could spell the end of the country’s rotating dictatorship. Similar sentiment parties gain massive support throughout Europe. Russia, on the defensive, is now massing nuclear missiles along European borders, US disintegration is no longer doubted, and the only debate is, when.
Let’s get back to mainstream. Headline, ‘London Mayor Boris Johnson tells cab drive to f*** off.’ There you go.